21 Jan To Embed Or Not To Embed? A Band’s Dilemma 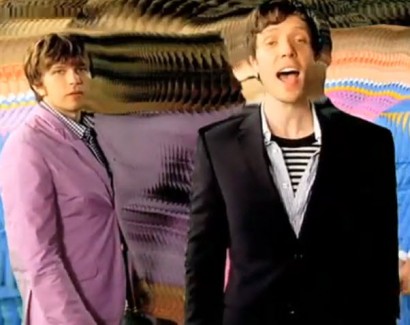 Rock band OK Go released a new video recently for “This Too Shall Pass“, the second single from their latest album. They have a lot of fans, people dig their music. So why can’t we embed the video here?

In a recent open letter to fans about the issue, OK Go lead singer Damian Kulash wrote “Unfortunately, as of now you can’t embed diddlycrap. And depending on where you are in the world, you might not even be able to watch it.”

That’s because OK Go’s label, EMI, won’t allow embedding. EMI (and other record labels) are struggling to recoup their investments in bands. No one’s buying CDs and music is freely swapped around the internet. So they’re using whatever means they can to capitalize.

To that end, they insist OK Go fans view the video on Youtube because targeted ads are shown in the player, for which the label, and the band, get a small slice of the revenue. And if they don’t have ads for your country, they won’t let you watch the video.

Kulash explains: “The catch: the software that pays out those tiny sums doesn’t pay if a video is embedded… We’re – unbelievably – stuck in the position of arguing with our own label about the merits of having our videos be easily shared.”

The band is conflicted. OK Go willingly foregoes some profits by uploading their own videos to Vimeo and MySpace, where embedding is allowed.

“It stings a little,” Kusher admits. “Not only does it cannibalize our own numbers… but, as you can imagine, we feel a lot of allegiance to the fine people at YouTube. They’ve been good to us, and what they want is what we want: lots of people to see our videos.”

Talk about stuck between a rock and a hard place. OK Go’s dilemma is just another example of the growing pains that the music business is going through. Kulash nails the quandry we’re currently in with regards to artists and their music, and what/how they earn for it:

Let’s take a wider view for a second. What we’re really talking about here is the shift in the way we think about music. We’re stuck between two worlds: the world of ten years ago, where music was privately owned in discreet little chunks (CDs), and a new one that seems to be emerging, where music is universally publicly accessible. The thing is, only one of these worlds has a (somewhat) stable system in place for funding music and all of its associated nuts-and-bolts logistics, and, even if it were possible, none of us would willingly return to that world.

Aside from the smug assholes who ran labels, who’d want a system where a handful of corporate overlords shove crap down our throats? All the same, if music is going to be more than a hobby, someone, literally, has to pay the piper. So we’ve got this ridiculous situation where the machinery of the old system is frantically trying to contort and reshape and rewire itself to run without actually selling music. It’s like a car trying to figure out how to run without gas, or a fish trying to learn to breath air.

What do you guys think? How would you like to see this work in the future? What’s fair? -Dr.FB