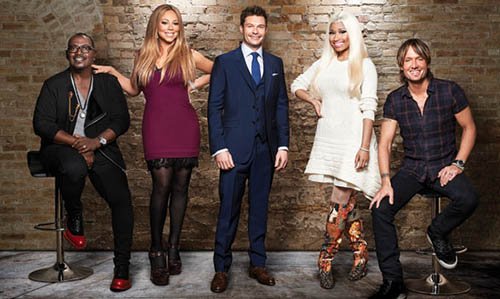 Seacrest stood between Mariah and Minaj who have not been getting along with each other during auditions and despite reports, we are sure producers are hoping for fireworks between the 2 judges instead of hoping for a talented top 10 finalists.

Jackson gave his usual rhetoric that there will be “at least 4 contestants” that will have big careers because of Idol. Urban spoke that he wants to help contestants get rid of the cheese around them to find the true musical talent they have. Yea, like ditching a cowboy hat, wearing tight open shirts, and marry a Hollywood actress.

Mariah talked about how Idol went about approaching her for the job. We wish someone would have asked if it would have been smarter to wait to see who the other judges were before signing on and if she had any regrets:

“I was on the fence about the whole thing. I got approached by all the shows. He [her husband, Nick Canon] said I should do it because it’s the top, it’s the cream of the crop. And I felt like, ‘Do the show that’s produced massive stars who have had major careers.’ I know everyone’s like, ‘We can’t have schmaltzy answers,’ Well guess what? Some people still want to be inspired. Some people need to have that kind of validation and to feel like, if this person did it, then I can. And I do have one of those stories.”

Minaj talked about why she was picked a judge and how she never pictured to be in the limelight like she is now. Ahem:

“[There’s] a judgmental culture in hip-hop. Sometimes you are afraid of being too famous because it’s almost, like, is that even cool? Being that accessible, someone you see on TV every week? I never pictured myself as that type of person. I’m still surprised that I decided to do it.”

Aside from The Voice, ratings for the other singing shows have went down. With Christina Aguilera and Cee Lo leaving that show, it may be in the same boat. The shows rarely focus on the talent but more on the star of the judge.

Who can name the last winner of X Factor or the past 3 winners of Idol? Thought so.-DocFB

Diagnosis: The 12 Season of “American Idol” kicks off on January 16th.