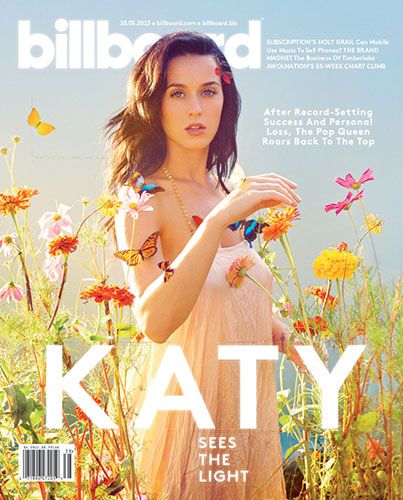 Katy Perry is the Billboard cover story 2 weeks after her song “Roar” was bumped out of the top spot. With “Roar” she tied Rihanna with nine number one songs.

“I am exhausting so much energy right now,” Perry exclaims between bites of Cheez-Its — furtive bites, because eating Cheez-Its is breaking training. “For eight days straight, I’ve been conditioning — just going, going, going at the height of my physical capabilities. I’m supposed to eat meals every two hours, but it takes me an hour to think of what I want to eat, so by lunchtime, I’m starving. I’m just so hungry all the time.”

For more on the Billboard cover story and Barbara Walters throwing her shade, click here!

She talked about Barbara Walters giving her shade for being late to an interview while her marriage to Russell Brand was falling apart;

“I shouldn’t have done the interview: I was playing Madison Square Garden that same night, and I knew that the end of my marriage was coming. I was just exhausted and stressed,” Perry says. “I’d prepped everyone that I was running late, but Barbara showed up at the original time anyway. When I got there, I apologized immediately, but then she said to me, ‘You know, I’ve only ever waited for one other person this long, and you know who that person was? Judy Garland. You know how she turned out, right?’ I was like, ‘Oh, snap! Yes, bitch!’ I think it’s the coolest thing that Barbara Walters shaded me. I just couldn’t tell her as we were sitting down for a mega-interview, ‘Hey, my marriage is falling apart. Give me a break.'”

Katy talked about the inspiration for “Prism” and how it was going to be a darker record than “Teenage Dream”;

“I was really inspired by this little six-minute thing by Eckhart Tolle where he speaks about loss,” she says, referring to a video from the author of the best-selling inspirational tome “The Power of Now.” “When you lose something, all your foundations crumble-but that also leaves a big hole that’s open for something great to come through.”

While coming up with ideas for “Prism”, Katy was talking into her iPhone into the Dictaphone feature.

She recorded a majority of the album in Stockholm and although the record company was expecting the record in February of 2014, she was ready in May to have it out in October 2013;

‘Guys, I think I’m going to have everything ready enough to come out this fourth quarter,'” Perry says. “We weren’t really thinking we’d be able to put anything out until February, but you don’t want to sit on something that’s about to burst.”

Make sure to pick up the copy of Billboard magazine for more of their exclusive interview with her!-DocFB