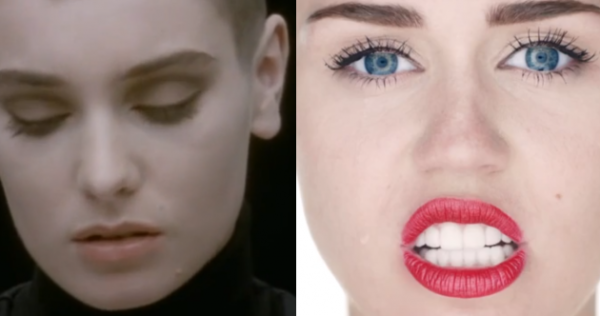 Bro-ther! Sinead O’Conner wrote another letter after Miley Cyrus laughed off her last one when Sinead showed her concern. So why write another one????

In the new letter, Sinead states:

“Miley… Really? Who the f–k is advising you?”

“Because taking me on is even more f–kin’ stupid than behaving like a prostitute and calling it feminism. You have posted today tweets of mine which are two years old, which were posted by me when I was unwell and seeking help so as to make them look like they are recent. In doing so you mock myself and Amanda Bynes for having suffered with mental health issues and for having sought help.”

“I mean really really… who advises you?” “[H]ave you any idea how stupid and dangerous it is to mock people for suffering illness? You will yourself one day suffer such illness, that is without doubt. The course you have set yourself upon can only end in that, trust me. I am staggered that any 20 yr old woman of the 21st century could behave in such a dangerous and irresponsible manner as to not only send the signal to young women that its ok to act like prostitutes but also to the signal that those who have suffered or do suffer mental health problems are to be mocked and have their opinions invalidated. Have you no sense of danger at all? or responsibility? Remove your tweets immediately or you will hear from my lawyers. I am certain you will be hearing from all manner of mental health advocacy groups also. It is not acceptable to mock any person for having suffered.”

For more of the letter and Miley’s response, click here…

“It is most unbecoming of you to respond in such a fashion to someone who expressed care for you,” And worse that you are such an anti-female tool of the anti-female music industry. I hope that you will apologise to Amanda Bynes and to any person who has been wounded by your mockery of those who have suffered. And I hope that you will wake up and understand that you in fact are a danger to women.”

Furthermore you posted a photo of me tearing the pope’s photo .. as if to imply insanity.. by doing so all you have achieved is to expose your staggering ignorance,”

“I suggest you read The Philadelphia Report, The Boston Report, all the reports which will illuminate for you why that action of mine remains sane and valid. By mocking it you mock every child who suffered sexual abuse at the hands of priests and had it covered by the Vatican. You could really do with educating yourself, that is if you’re not too busy getting your tits out to read.”

How did Miley respond? She took to Twitter yet again:

Sinead. I don’t have time to write you an open letter cause Im hosting & performing on SNL this week.

So if youd like to meet up and talk lemme know in your next letter. 🙂

As much as Sinead is concerned for Miley, she obviously doesn’t care what she thinks. You can’t help someone who doesn’t want help and is not asking for it. The letters need to stop.-DocFB

Diagnosis: I think the second letter should have just said “Never mind. Eff off! Have fun with your foam finger!” and that’s it.