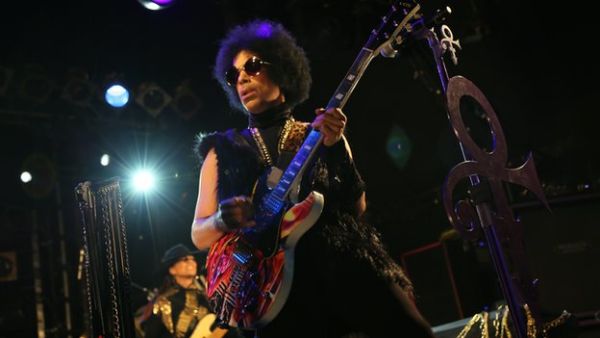 PRINCE & 3RDEYEGIRL performed 2 shows at Ronnie Scott’s in London late last night/this morning that is being described as one of the most intimate concerts the icon has ever done. Imagine him performing in your living room. People were that close.

André Rigedahl was there for the second show and had this to say about his experience:

Just over the moon of happiness and joy and live for music!

PRINCE & 3RDEYEGIRL invited us to their living room at Ronnie Scotts and it was a beautiful, intimate and intense experience. And I had the best seat in the house.

They played incredible versions and jams. Including “Nasty Girl” and “The Love We Make” and “Liatach”.

He played keyboard for the most part and also did an amazing bass solo borrowing Ida’s bass.

12h of queuing – very intense and exhausting but so worth it in the end.

“Nasty Girl” evolved into a long “Nasty Girl Jam” session with solos from Ida & Donna. A love Bizzare had some really nice saxophone.

Most of the set was Prince on keys, 3EG and Marcus on Sax.

As one of the encores he wanted to play guitar which was all set up and ready to go in the middle of the stage but the sound of his main mic was to high in the center, resulting in feedback and the sound guy could not fix it so instead he went back to the keyboard.

Prince also did some of the sound adjustments and fine-tunings himself during the show.
The played for about 2h and kept playing well after the 3am official closing time.

We also heard he performed “The Whole Of The Moon” by The Waterboys. What???

It seems Prince did pretty much stick the boards and bass the entire night, taking a break from guitar as Marcus Anderson solo’d on “Purple Rain” for good measure…or 17 measures…if you’re funky!

Diagnosis: We are still looking for more reviews for shows, so please send them here to be featured. You can leave them in comments if you like.