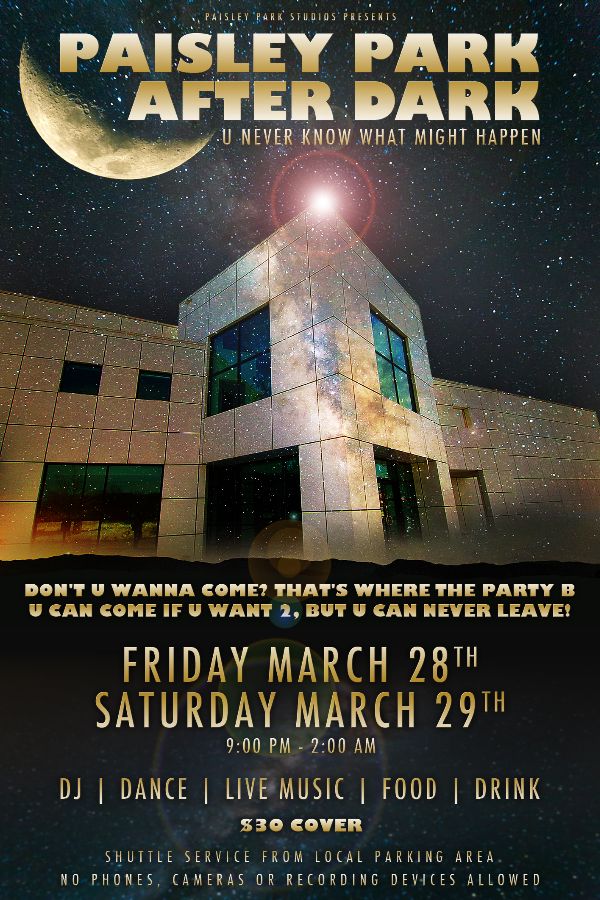 Ain’t nothing like a purple party because a purple party don’t stop! This weekend, Friday March 28th & Saturday March 29th, PRINCE’s PAISLEY PARK Studios are being open to the public for a party club atmosphere like no place else from 9 P.M. til 2 A.M.

Last weekend kicked off Paisley Park After Dark as Kirk Johnson’s live band played, footage of 3RDEYEGIRL from Montreux was shown and DJ’s FundRaiser and Lenka Paris were in the mix.

The flyer was made by LV.

As for this weekend, there will be live music and other goodies as well, plus, since it is Paisley Park, you never know who might show up or what might happen.

The cover is $30 and there will be shuttle service provided this time.

NO PHONES, CAMERAS, OR RECORDING DEVICES WILL BE ALLOWED!

Don’t forget to watch the latest PRINCE Spreecast as we will have more info on Paisley Park After Dark and other purple news! Marcus Anderson’s new album “Style Meets Substance” is available on iTunes and Amazon.-DocFB