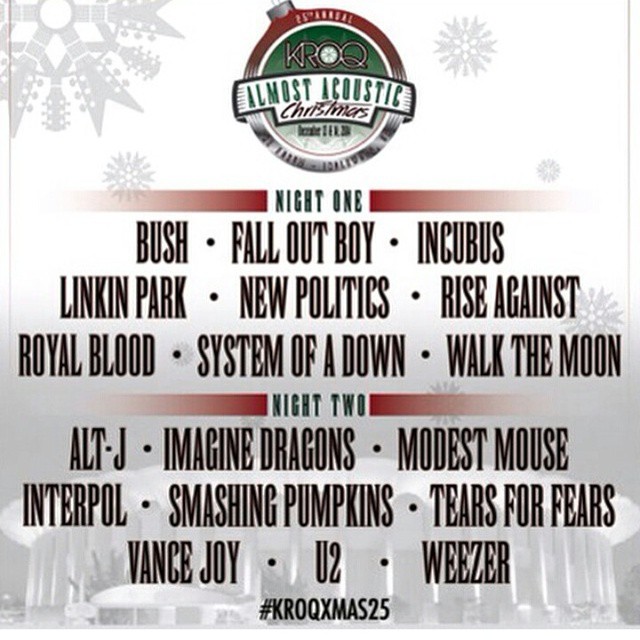 Well it appeared too good to be true and now it is.

Bono is still suffering from injuries he obtained in a bicycle accident last month in New York City and The Edge of U2 confirmed they will no longer be performing at KROQ’s Almost Acoustic Christmas in Los Angeles this month.

“He managed to come out of it with what you can only describe as injuries from a car crash, literally multiple fractures of bones in his elbow and his back. But he’s doing OK. We’re kind of lucky he was wearing a helmet, so he didn’t actually break Central Park. He’s made of tough stuff and he’s bouncing back.”

“He’s so upset about the fact that unfortunately as we’re about to announce, we’re not going to be able to do the Acoustic Christmas. He’s been told by his doctors to stay put. He’s back in Dublin right now and he basically can’t move for the next couple of months.”

“The poor guy, basically his left elbow was shattered, so a lot of the work was reconstructing the joints and putting in wires and plates. He actually showed us some x-rays a couple days later, it looked like a miniature Eiffel Tower.”-The Edge of U2

“That’s the other thing that I came to the call with was some good news. The good news is, and this is a scoop for you guys on KROQ because no one else in the world knows this yet, talking to Bono’s doctors they’re very confident that he’ll be up and about in time for the U2 tour, which we want to announce right now. We’ll be on the road from May. We’re doing shows in North America, Canada and the United States, and Europe. 19 cities and the first time in a decade that we’re going to be playing indoors. We decided after the size of the 360 outdoor production that we couldn’t really go any bigger, so we decided to take it smaller. So we’re going indoors and we’re going to do something intimate and different. We’ve got a lot of interesting things planned.”

“We have a lot of things planned that will make it intimate, it’s part of how you present yourselves and we have some very interesting ideas of how this show will go. One of the most unusual things that we’re doing, that we’ve never done and I don’t know if anyone else has, we’re going to be doing shows on consecutive nights that are quite different. They work perfectly as a U2 show. I’m not saying you have to take in 2 nights, but for people who do go to consecutive nights, they’re going to get a very different show. They’re loosely around the theme of innocence and experience, which is the name of the tour.”

The iNNOCENCE + eXPERIENCE Tour which begins in 2015, will see U2 play indoor arenas for the first time in a decade, in 19 cities worldwide during it’s first year with pairs of shows in each city. Tickets for all shows will go on general sale on Monday, December 8th.
“We’re so delighted that the narrative around the album is now focused on the music itself and no longer on the delivery method.”

The Edge added, “We still feel like those 21 year olds who just heard that their first single had been played on KROQ. It really feels that way to us.”-DocFB

Diagnosis: Who will now replace U2 at KROQ’s event?