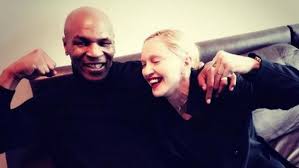 Mike Tyson is set to appear on Madonna‘s “Rebel Heart” and he calls it “intense and crazy” when talking about the cameo.

Tyson appears with Chance The Rapper on the new Madonna song “Iconic”.

“Madonna calls you and tells you to come somewhere, you go,” Tyson says. “I didn’t know what the hell I was going there for. I’m just there having a good time and hanging out with Madonna. She has her producer there and I go into the studio and I didn’t know if she wanted me to talk or rap. I just go in there and start talking. I’m talking about my life and things that I have endured. I’m saying some really crazy stuff. It was really intense.”

Mike tells Rolling Stone that he ad-libbed and did the song in one take.

“When I did it, I think about being some guy like [Benito] Mussolini and they’re really arrogant, but you try to come from a positive perspective and be uplifting. You watch Mussolini on television — even though we don’t understand what he’s saying — he is so mesmerizing. I look at myself in that way.

“I know people may say ‘this guy’s a fascist’ and all this stuff, but man, you can take positivity from watching him,” added Tyson. “No wonder why Hitler was attracted to him. This guy’s a hypnotic figure. There’s so much pride behind what he’s saying. I’m not even Italian and I feel the pride he’s projecting. He had that street swag; he was doing this stuff with his hands and moving his head before it was even hip-hop.”

Diagnosis: Comparing himself to Mussolini? Hanging out with Madonna….sure starts to rub off on you in weird ways it always seems.