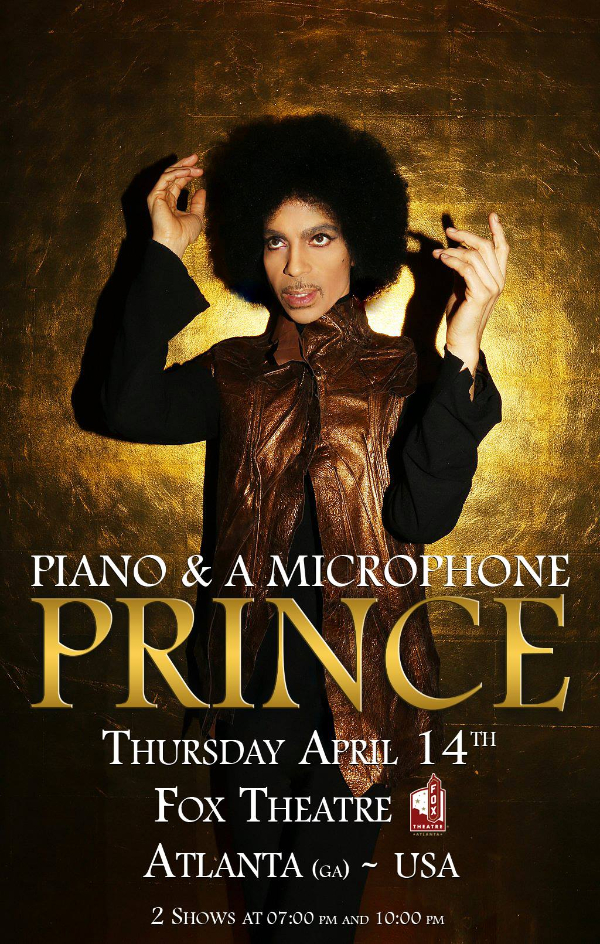 Real Housewives or real music? We prefer the music part as PRINCE is bringing his Piano And A Microphone tour to Atlanta April 14th.

Update: PRINCE has rescheduled his Atlanta shows for PAril 14th. The shows were to take place April 7th before the postponement. .

Tickets will be available at foxtheatre.org or by calling 855-285-8499. The box office also will be open at noon for in-person sales.

Everyone in attendance will receive a copy of Prince’s latest CD Hit N Run Phase Two.

Over the weekend, Prince covered David Bowie’s “Heroes” at his Toronto concert where he performed 57 songs over 2 shows. Atlanta is in for a treat!

Prince’s Piano & A Microphone tour commenced on January 21 at his US recording studio, Paisley Park, where he stunned fans who travelled from all over the world to see him perform two very personal shows. According to a Rolling Stone review of these shows, Prince performed on a stage decorated sparsely with candles and shrouded in smoke. The show was framed by the story of how he mastered the piano and emerged from the shadow of his father, jazz pianist John L. Nelson. “The set moved chronologically (with a few exceptions) through the first decade of Prince’s career,” Rolling Stone reports, “including at least one song from each of his first 10 albums.”

In addition to classic songs from albums including 1999, Purple Rain, and Sign o’ the Times, the set-lists have also featured covers by Joni Mitchell, Paul Robeson and Ray Charles; songs Prince has written for other acts including The Time, Sheila E. and Vanity 6; and even a Thelonious Monk-style version of the theme to Batman.-DocFB

Diagnosis: Over a week’s notice? Atlanta, no excuses. Be there!