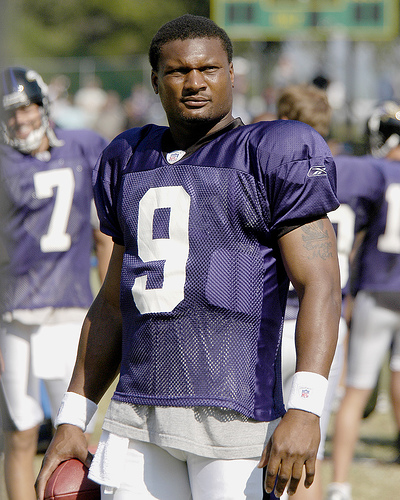 Former NFL Football Star Steve McNair was found dead in his home with a fatal gunshot wound to his head.  A female victim whose name has yet to be released, but is known,  was also found dead.  Steve Mcnair Was 36.

Steve played in the NFL for 13 years. 11 years with the Tennessee Titans and his final 2 with the Baltimore Ravens before retiring in 2007. He was the league MVP in 2003.

“We are saddened and shocked to hear the news of Steve McNair’s passing today,” Titans owner K.S. “Bud” Adams Jr. said in a statement. “He was one of the finest players to play for our organization and one of the most beloved players by our fans. He played with unquestioned heart and leadership and led us to places that we had never reached, including our only Super Bowl. Our thoughts and prayers are with his family as they deal with his untimely passing.”

Right now, there are no suspects. Our thoughts and prayers go out to Steve McNair’s friends and family at this time.-Dr.FB

UPDATE: The other victim has been identified as Sahel Kazemi, a friend of Steve McNairs.