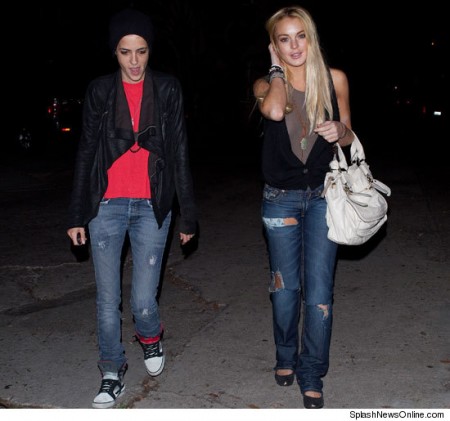 hits the slammer. They stepped out for a quiet dinner at Matsuhisa in Beverly Hills. I thought Sam was over the” Crazy Freckled Monster”, but the original plastic barbie, Joan Rivers, decided to open her old, cold, fugg mouth and pulled a rant on Lohan via Twitter. None other than the beautiful Sam Ronson stepped in and attacked ol’ Chia head!

“Hey Joan Rivers, you have collagen older than Lindsay, pick on someone your own age, oh wait, I guess people that old can’t hear,” she wrote.

Seriously, it’s nice to see Sam show some compassion for her old flame, and Lindsay smile for