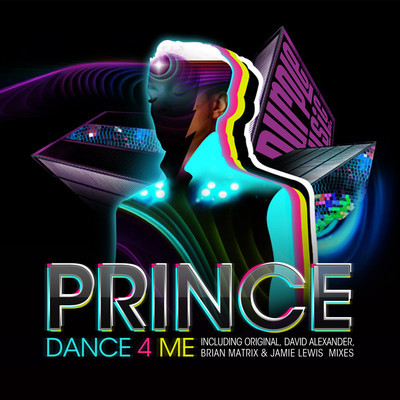 Prince’s “Dance 4 Me” remixes are about to be released and the label is giving you a sample of the remixes.

Purple Music has this to say about Prince and the remixes:

PURPLE MUSIC IS VERY PROUD TO ANNOUNCE THE EXCLUSIVE WORLDWIDE RELEASE OF “DANCE 4 ME “BY THE LEGENDARY AWARDS, OSCAR WINNER AND SUPERSTAR PRINCE !

The musician that brought us such glorious hits as ‘Kiss’ or even ‘Purple Rain’, a man who went on to become one of THE biggest influences on a worldwide scale earning him Seven Grammys and Ten Platinum albums selling over 90 million copies… !!

PRINCE unique artist who plays 26 instruments and has roughly 1000 unreleased songs at his first class Paisley Park Analog Studio in Minneapolis, is once again heading into the club direction with the release of, “DANCE 4 ME” (from the album ‘MPLSoUND’) out on December 9th on VINYL 12” LIMITED PICTURE DISCS & CD SINGLE.
DANCE 4 ME is a mix between Funk, House and a big room sound that will appeal not only to Prince fans but also the whole new club generation… they will love it!
Releasing music of this iconic superstar, who has penned countless hits for Chaka Khan, The Bangles, Sinead O’Connor and others… it’s for us a massive honour !!…
…..stay connected for more news!!

Check out the remixes below:

Prince “Dance 4 Me” by Purple Music

Let me know what you think. A couple of them I have heard before.-DocFB

Diagnosis: You are standing there in your Christian Dior….

P.S. Thanks to FunkyMrG for the heads up on Twitter…..