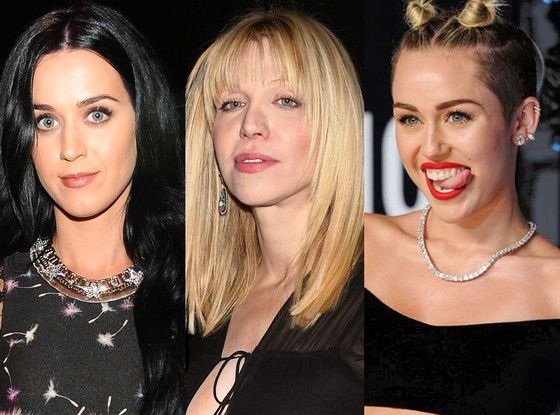 Courtney Love came out of her cage to go after Katy Perry and Miley Cyrus and the claws went flying!

“Miley Cyrus is not setting any trends. I wonder who decided to put her in white mesh and a pair of pasties and a faux fur (for September’s iHeartRadio festival)? It was dumb and trashy-looking.”

“I liked her attitude and still do, but it’s wearing so thin.”

Love sets her sights on Perry by comparing her to Miley:

“Despite all their endless sales and downloads, will go the way of Sub Pop’s (Seattle grunge group) Tad singles, into some sort of oblivion. It’s artless pop at the end of the day.”

“Yeah, I have listened to Roar and We Can’t Stop and I love Wrecking Ball for a guilty pleasure, but these are songs written by men mostly for pop tarts. This is not rock ‘n’ roll. Soul and rock ‘n’ roll endure, pop does not, that’s why it’s called pop. It goes pop like a bubble, and then it’s just a funny ‘do you remember when’ memory.”

“if you can’t start a trend, you’re screwed. Good luck on ripping off Katy Perry’s boobs.”

I’m not sure about “Wrecking Ball” but Katy wrote “Roar” and writes her own songs, sometimes with other writers, yet it is still her.

Seems like someone is jealous over someone’s boobs if you ask me.

Hard to take her advice seriously when almost 20 years ago she did this with Madonna.-DocFB

Diagnosis: “Courtney Love is in dire need of attention”-Madonna in 1995 and DrFunk in 2013