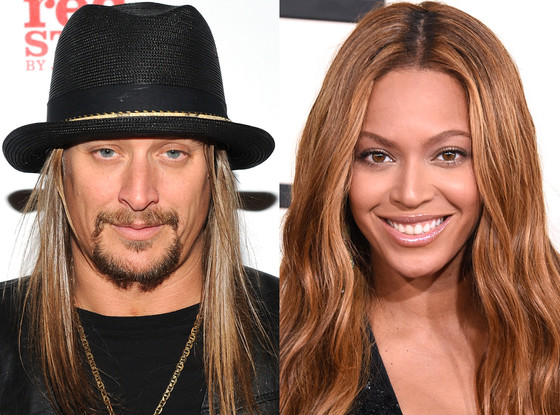 Kid Rock has a new album out “First Kiss” and did an interview with Rolling Stone speaking his mind, and the subject of Beyonce came up and he doesn’t understand her popularity.

“Beyoncé, to me, doesn’t have a fucking ‘Purple Rain,’ but she’s the biggest thing on Earth,” he said. “How can you be that big without at least one ‘Sweet Home Alabama’ or ‘Old Time Rock & Roll’?”-Kid Rock.

“People are like, ‘Beyoncé’s hot. Got a nice fucking ass.’ I’m like ‘Cool, I like skinny white chicks with big tits.’ Doesn’t really fucking do much for me.”-Kid Rock

So it went from not having a big hit to her not being white and having big…wits?

Beyonce’s fans went on the attack. The Beyhive started posting crazy comments on Kid’s Instagram page and everywhere they could on social media.

Kid then posted a photo of Raid aimed at the Beyhive. Lord.-DocFBDiagnosis: It’s interesting to me that Rock is a huge Bob Seger fan and Prince was wanting one of those rock anthems which led to him writing “Purple Rain” in the first place. Kid Rock inducted Seger into the Rock & Roll Hall Of Fame in 2004, the same year Prince was inducted. He didn’t seem to care too much for Prince then but now it seems that “Purple Rain” is the gold standard to where you are on the music icon ladder.