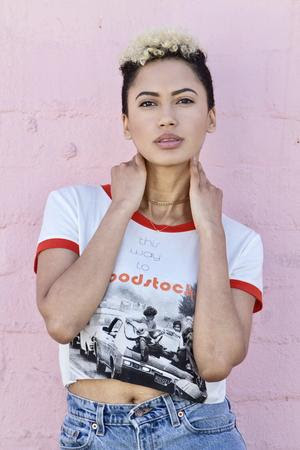 Andy Allo is not only set to co-star in Pitch Perfect 3, but is also going to be touring Australia!

Cameroon-born singer and songwriter Andy Allo is an artist who is truly paving a path with a sound and vibe that is uniquely her own.

Andy released her first album, ‘UnFresh’ in 2009 and two years later, joined Prince‘s New Power Generation as a singer/guitarist and worked with the legend on her sophomore album, ‘Superconductor’ that peaked at #4 on the Billboard Heatseekers Chart. She has performed on Jimmy Kimmel, Guitar Center Sessions and showed her acoustic chops on Billboard Sessions Exclusive.

Now, for the first time the talented singer-songwriter, guitarist and actress will visit Australia to play a series of intimate shows in July at Melbourne’s Bird’s Basement.

“This will be my first time visiting and performing in Melbourne or even Australia,” reveals Andy. “I’m looking forward to playing at Bird’s Basement where a lot of incredible artists have played before me and I can’t wait to meet all the amazing people at the shows. I’ve got a lot of new songs I’m so excited to play for the first time!”
In 2015, she released an EP titled, ‘Hello’, featuring 4 songs where she explored her love for pop and rock. Now having released her next project, ‘One Step Closer’, Andy dives deeper in to her acoustic singer-songwriter roots. Of her new project, Andy explains, “My new record feels like I’m getting back to my singer-songwriter roots. It’s 4 songs that really share what I’ve experienced and how I’ve grown over the last couple years. I feel like this is just the beginning of my story. It’s a journey but with every record, I feel I’m get closer to who I am as an artist and songwriter. There’s still a lot I want to share with the world.”

Andy has toured extensively throughout Europe and Canada and recently completed on a 25 city US tour that started in April 2017. She will also be seen in the anticipated sequel, ‘Pitch Perfect 3’, set to be released in theatres December 22nd. She will play of Charity, part of the group Dew, the rival band of the Belles.
Says Andy, “I’ve been a fan of the films since the beginning and received a call at the end of last year saying the Director of ‘Pitch Perfect 3’ Trish Sie wanted to chat with me. We had an amazing chat and a few months later, I got the call that I was cast in the movie. I had the time of my life shooting. Also getting to work with such amazing women like Elizabeth Banks, Rebel Wilson, Ruby Rose and Anna Kendrick was really inspiring. Everyone on set was so kind and so much fun. I can’t wait to see it when it comes out in December!
“We knew she’d be leading her own revolution soon,” adds Prince. Indeed, that soon is now.