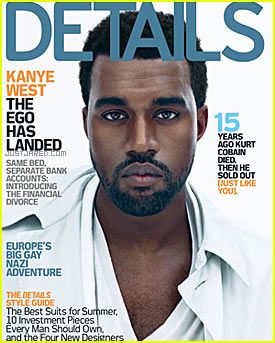 Kanye West is on the cover of the March issue of Details magazine and as Kanye clearly knows the world always awaits the pearls of wisdom he imparts, he graces us all with these flashes of brilliance:

“I like to embody titles, y’know, or words that have negative connotations, and explain why that’s good,” he says. “Take the word gay—like, in hip-hop, that’s a negative thing, right? But in the past two, three years, all the gay people I’ve encountered have been, like, really, really, extremely dope. Y’know, I haven’t, like, gone to a gay bar, nor do I ever plan to. But where I would talk to a gay person—the conversation would be mostly around, like, art or design—it’d be really dope. From a design standpoint, kids’ll say, ‘Dude, those pants are gay.’ But if it’s, like, good, good, good fashion-level, design-level stuff, where it’s on a higher level than the average commercial design stuff, it’s, like, gay people that do that. I think that should be said as a compliment. Like, ‘Dude, that’s so good it’s almost . . . gay.’”

“I’m the f—ing end-all, be-all of music. I know what I’m doing. I did 808s in three weeks. I got it. It’s on cruise control. . . . Man, we talked about music for God knows how long! Now let’s talk about how my f—ing sweater didn’t come back right from Korea. That’s what’s interesting me.”

“I got into doing beats for the video games I used to try to make. My game was very sexual. The main character was, like, a giant penis. It was like Mario Brothers, but the ghosts were, like, vaginas.”

“Someone could be a better rapper, dance better. But culturally impacting? When you look back at these four and a half years, who’s the icon at the end of the day? Who broke down color barriers?”

Has to be you, of course, O’ Great Kanye. You are so wise, so awesome, so godly. So gay.