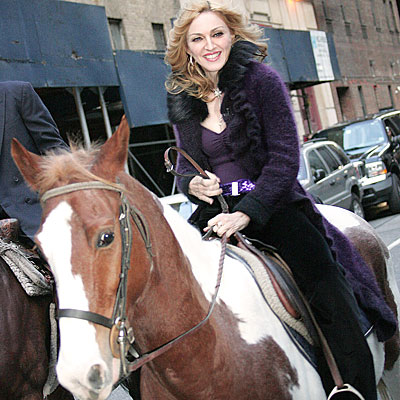 Madonna took a fall of a horse again on Saturday. Are the paparazzi to blame?  Depends on who you ask.

If you ask Madonna’s reps, the paparazzi got too close and startled the horse, causing Madonna to fall. If you ask a photographer, he says he was the only one there and took shots of her on the horse long before she fell, or else he would have pictures of her fall.

The paparazzi do follow celebs everywhere a little too much but something tells me Madonna took a fall and maybe blamed the paps.  Just saying here.  Just an opinion.  Thankfully, she was not seriously injured after being taken to the hospital.  No broken bones like in 2005 when her arm ended up in a sling.

Again, glad Madonna is OK and to the paps, we don’t need another fricken shot of Madonna riding a horse. Wilbuuuuuuuuuuuuuuuur!-Dr.FB