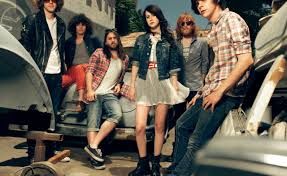 Posted at 07:46h in Music by drfunkenberry 0 Comments
0 Likes
Share

Sleeper Agent has announced they would embark on their first ever headlining tour this April with Holychild and Pagiins to support! The Bowling Green, KY sextet is touring in support of their forthcoming second album, About Last Night, which will be released on March 25th on RCA Records / Mom & Pop. DrFunkenberry.com is hooking U up with a FREE DOWNLOAD of the song here! Tickets for all dates will be available for purchase beginning this Friday, March 7th at 10:00 AM local time. Sleeper Agent will appear next week at South By Southwest music festival in Austin, TX and the band was included in NPR Music's list of the "festival's best discoveries." For tour dates, click here!
Read More

28 Jan Life On The Road With Sleeper Agent

Sleeper Agent has released a behind the scenes look at the band before they go on the road and to promote their upcoming album "Celebrasion" due for release on March 25th. Click here for the band's upcoming tour dates...
Read More