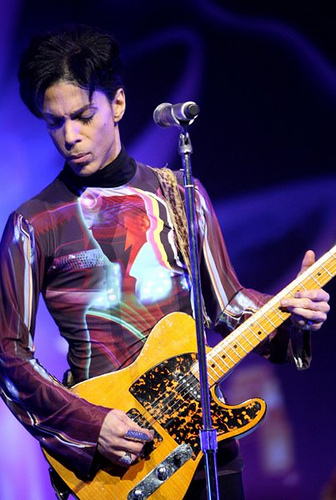 If you were expecting just PRINCE related artists for the PRINCE tribute concert October 13th at the U.S. Bank Arena in Minneapolis, Minnesota, think again.

A source close to the family is stating they are trying to book Bruno Mars, Lady Gaga, Stevie Wonder, and other big names for the tribute concert. This source told all to Rolling Stone.

The concert has already been rescheduled 3 times. The first was to happen on August 13th, the date Prince was in discussions to play before his untimely passing on April 21st. he would have been the first artist to play the arena. The second date was to be in late September but a few Prince related bands already had prior commitments. The new date, October 13th is what is in place now although tickets have not been put on sale yet and they plan on trickling the announcements of who will be performing at different times, so when tickets do go on sale, do not expect to know all the names of who will be performing at the tribute.

Back in 2001, Sheila E. put on a Family Jamm charity event that included performances by The Revolution, Madhouse, Patti Labelle, Chaka Khan, Apollonia, (The original Time line-up was listed as well but backed out due to a money issue) The Family, and had introductions by Carmen Electra and others. I think this is what the hardcore fans want. Interestingly enough, artists who were performing, their names were trickled down and not announced all at once and despite the ending lineup being quite steller, the arena was less than half-full due to people not knowing who was going to perform til it was too late to travel and get a good plane ticket.

For more information on the Prince tribute and TV deal, click here!

An arena that big needs big names and they are trying to get it broadcast on TV and without those big names, a network may not want to pick it up. Randy Phillips, who used to manage Prince a short time in the 1990’s is trying to work out a TV deal. Phillips, who was the head of AEG until a few years ago, and was behind Michael Jackson’s “This Is It” shows at the O2 Arena in London, had a falling out with Prince over the Jackson shows. The reason? Prince performed 21 nights in 2007 at the O2 arena and Phillips promised Prince that record would always stay. Less than 2 years later, Jackson sold close to 50 concerts for that arena which would have broken Prince’s record. Michael Jackson passed before one show could be done so Prince’s record still stands but Prince was not cool that the record was even attempted. AEG even tried to hire Prince’s main bodyguard Trevor Allen, at the time to handle Michael. Allen declined. Until his passing, Prince worked with solely with Live Nation and independent promoters aside from a couple charity events that Prince agreed to do that AEG was involved with overseas.

Ken Elrich has also been contacted to help Phillips get a TV deal for tribute concert. “Kenny and I are willing to do something for him,” Philips tells Rolling Stone, who adds the concert should be produced this year, “or you’re going to lose the moment.”

It was announced yesterday that property that Prince owned would be sold to make money to pay for lawyers and other things. Paisley Park is not one of the properties being discussed. A TV deal would help out the family and relieve a little bit of stress to raise money while things get worked out. Right now, there are no plans to release any vault music or any reissues through Warner Bros. Records or Jay Z’s Tidal streaming service.

To reiterate, Prince associated bands have been contacted to perform but they want to fill the stadium and get a TV broadcast deal and they feel the interest will not be there unless there are bigger names involved. This is one of the many reasons the concert should have been put together quicker because as time has passed, more bigger names are needed, where a benefit concert in his name with associated artists and only a few big names would be needed. Also, let’s remember, you need the big name artists to take a very minimal payday and also sign away the rights for the TV special. That again would have been easier if the concert was done sooner to where you may have had big names waiving their fee. With everything that has been going on with the estate and Tyka Nelson, Prince’s only living blood relative, it has delayed the process and made events like this harder to happen in a shorter period of time. Harder, not impossible.

Some of the names wanting to be part of the tribute are different NPG bands through different era’s plus the Fonky Baldheads to name a few. As ticket info and performers get released, we will let you know and keep you updated. Thank you.-DocFB

Diagnosis: I know Stephen Hill wanted Bruno Mars to be a part of the BET Tribute in June but Bruno was finishing a new album was the reason Hill told me that Bruno would not be able to do it.