19 Mar Carrey, McGregor Film Too Gay To Play In The USA? 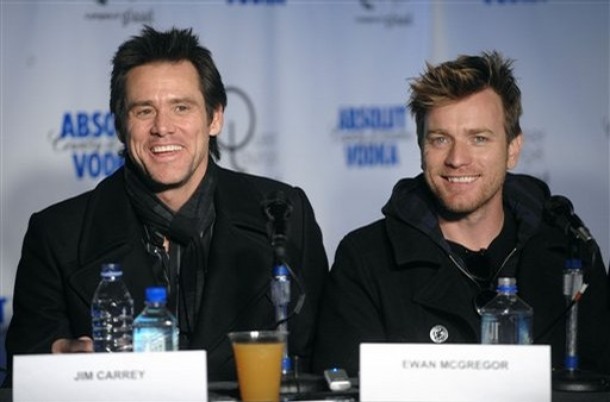 The TimesOnline is reporting that the Jim Carrey/Ewan McGregor film I Love You Phillip Morris is having a very hard time finding a U.S. distributor thanks in large part to rather frank and graphic depictions of gay sex.

The film is based on the true story of two men who meet and fall in love in prison. Carrey plays Steven Jay Russell, a Texas policeman turned con-man, and McGregor plays Phillip Morris.

Phillip Morris premiered at Sundance this year, and received mostly lukewarm reviews. But that isn’t apparently what’s stopping the film from picking up a distributor. According to Lewis Tice, director of marketing and publicity at TLA distributors, ““The depiction of the sexual activity was far more than I’ve ever seen in a mainstream film with a mainstream celebrity. There’s a graphic sex scene in the first ten minutes that I was surprised to see.” Variety magazine described one scene as a “spectacular, ride-em cowboy sex scene.”

Fears are that the graphic nature of the homosexual sex scenes has relegated Phillip Morris to straight-to-dvd hell. For now, the $13 million indie remains in limbo, though producer Andrew Lazar still holds out hope for a distributor and a U.S. theatrical release.