Posted at 14:46h in Music by drfunkencherry 29 Comments
0 Likes
Share 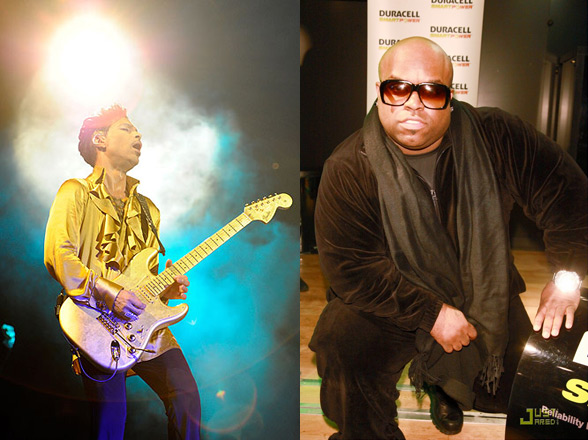 Prince never ceases to surprise us. His final (?) show at New York’s Madison Square Garden is on February 7th, and today we got the news that opening for him will be Cee Lo Green, the mastermind between the hugely popular song, “F%#k You”.

If you’ve been to a Prince concert in the last several years, you know that Prince doesn’t go for profanity anymore. He even changes the words to some of his classic hits to avoid it.

So now he’s invited the very guy that’s becoming a household name because of it to open for him? See what I mean – Prince is surprising. We’ll have to see if Cee Lo has to put any money in the swear jar by the end of the night.

Prince is a fan of Cee Lo’s – he’s been playing his hit “Crazy” at his live shows for the last few years.

Prince has also been jumping on stage with his opening acts at Madison Square Garden during the Welcome 2 America tour. So which Cee Lo song will Prince join in on? Only the purple one knows… -Dr.FB
UPDATE: ALL OF PRINCE’S SHOWS ARE FAMILY FRIENDLY WITH NO CURSING.
THEREFORE, CEE- LO WILL BE PERFORMING “FORGET YOU” AT THE SHOW.