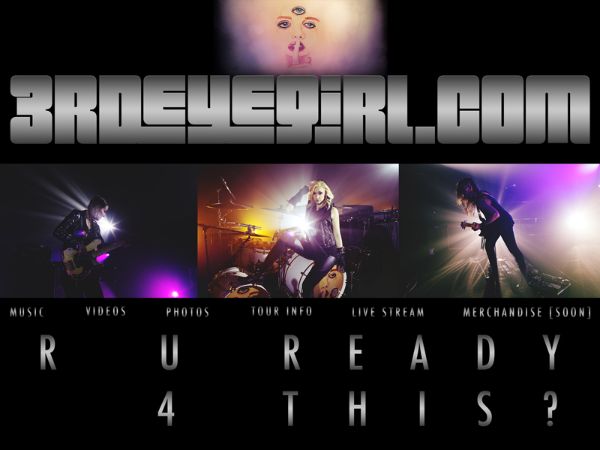 3rdEyeGirl.com has been relaunched or reloaded complete with videos to view, videos to watch, music to buy, exclusive photos, a place for tour news, and as we told you last month, a 3rdEyeGirl clothing line!

The tour news says upcoming July dates so with Montreux in the mix, there might be MORE shows coming your way! What about that Chicago hint? Hmm. Keep reading.

For the full article and video clips, click here….

In the video clip above, Hannah Ford-Welton talks about the 3rdEyeGirl clothing. There will also be more merchandise that people are churning out and hopefully, we can give you a preview soon!

Also, there was another 3rdEye TV livestream last night! It lasted an hour in length but was the “cats knickers”, as a rep for 3rdEyeGirl said before….We were treated to the 3rdEyeGirl drum kit, a candle and sometimes a flashing light….then a dancing partner.

It started with “Midnight Blues” with Prince singing “Lost my job at Mickey D’s (McDonalds for those not hip) cuz I was giving away too much food for free”… What? Could you just see him behind the counter or working the fries? Better not get no grease in the hair! A female comes into the song asking for security to escort someone out. Prince? Who knows? The jam was long and we LOVE it when PRINCE gets into the blues!

Next was “Superconductor Reloaded Instrumental” by Andy Allo. A short clip of this with vocals was played the other night. It works better as an instrumental. Now, although labeled as “Superconductor Reloaded Instrumental” half way through the song, it switches gears into “The Max” which is an instrumental. Interesting that people were saying it sounds like “Rave Into The Joy Fantastic” to them. Well, yes, the guitar part is from that. I’m just glad they know it is from Rave unlike when it first came out, they thought it was “RAID” like PRINCE was gonna be spraying some bugs or something. Def no “Joy Fantastic” doing that!

Then another “Q.U.E.E.N.” instrumental was played. It was longer than previous ones but I believe it was missing Prince’s guitar playing on this one.

Then what was played was “EndorphineDriver” which was an instrumental but sounded like only “Endorphinemachine” so perhaps the entire song was not played for us. During the clip, there was someone dancing in front of the drum kit, which most guessed was Damaris Lewis, who jumped on at the end to talk in the chat.

Then a short version of “Plectrum Electrum” was played with the message “Sleep Tight Plectrum Heads” and then it was over as Damaris Lewis came to talk briefly in the chat room.

As for Chicago this weekend as was stated in the room a couple of days ago, it seems there is something going down but our sources are saying right now it is a private event. If/when that changes, we will let U know!

Just an FYI. Found out from an secret source that PRINCE will be performing at the George Lucas wedding party Saturday. #justsaying #chicago

There are actually 2 private events in Chicago this weekend, the GL wedding party being one.

For now, enjoy the 3rdEyeGirl.com Reloaded site and make sure to sign up for Livestream to get email notifications of the 3rdEyeTV events. The texting option no longer seems to be working though….-DocFB

Diagnosis:  Very much preferred the hour version of the show playing a lot of music compared to the other night where it was 3 hours with sprinkles of hot jams.  I know they are testing the waters so I fully understand.