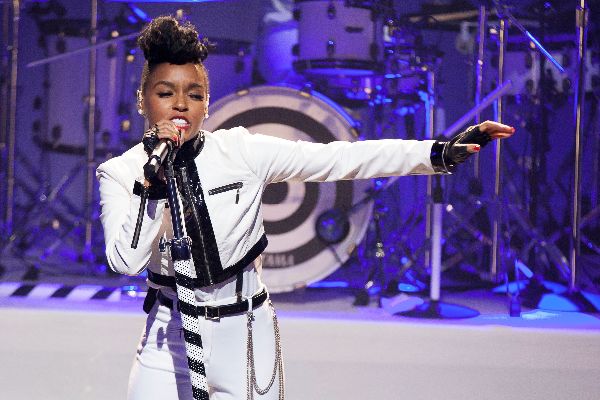 Somebody call Neil deGrasse Tyson, Janelle Monae just set off the second Big Bang! The Electric Lady lit up the stage last week in a breath-taking concert for a few hundred thrilled fans at the I Heart Radio Theatre in Burbank (the former Tonight Show set). Monae opened with a premiere of “What is Love” from the upcoming RIO 2 soundtrack before leading her nine-piece band on a voyage through crowd-pleasers including “Cold War,” “Dance Apocalyptic” “Primetime” and “Q.U.E.E.N.”

Indeed, with her combination of indefatigable showmanship, musical versatility, playful inventiveness and commitment to craft in musicianship, design, dancing and more, Monae is by far the most exciting performer to break out since Prince himself. Part James Brown, part Stevie Wonder, part Erykah Badu and ALL Janelle Monae, the exhilarating scope of her artistic ambition defies simplistic categorization. How many artists simultaneously invoke seminal Buddhist texts and Dorothy Dandridge; gnostic Science Fiction and Neo-soul; Hip-Hop and Torch Songs? Monae does it all with a combination of skill, hard work, charisma and that all-too-rare quality in our narcissism-gone-wild culture: humility. 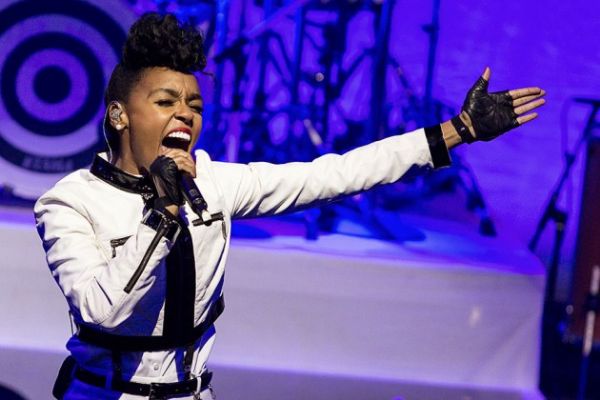 Undoubtedly energized by both her own love of music and the audience’s love of her, Monae was a perpetual motion machine, barely taking a breath it seemed while singing, stepping, sliding, jumping, and even venturing into the middle of the crowd and leading a group of giddy audience members outside as she danced on the sidewalk.

Irresistibly danceable, the songs from her highly acclaimed Neo-funk/R&B albums The Archarndoid and Electric Lady, which tell a meta-tale of forbidden love and individual liberty (and which would probably make a great graphic novel allowing her to develop the narrative more fully than she’s been able to do on album or in concert), neither descend into mindless nihilism nor condescend with preachy self-righteousness. While maintaining a high spirited party vibe, Monae’s fierce intelligence grounded the show in timely and timeless themes like the courage to be oneself and the right for all to have love and respect regardless of background.

For good reason Monae has earned admirers and adherents in many quarters including the White House. In many ways she is the perfect pop figure for the Obama age when social norms are evolving at such dizzying speeds. Her small but impressive Afro-futurist body of work points to a time where binaries are collapsed, social borders are crossed, definitions are destabilized and genres and genders are bent. It makes perfect sense that there would be a mutual affinity between her and the president whose family includes Black and White; first world and third world; Christian, Jewish and Muslim and whose messages frequently return to themes of common good and intertwined destiny.

Even in our age of narrowcasting, with the breadth and depth of her music and the exuberance of her performances, it seems that she is bent on reaching, representing and embracing everyone while pandering to no one. If anyone can accomplish that it will be her. Both at the top of her game and early in her career, this is indeed Primetime for Janelle Monae.

Diagnosis: Eric Greene is a civil rights activist and writer covering race, politics and the arts. His first book, the critically -acclaimed “Planet of the Apes as American Myth: Race, Politics and Popular Culture ” has been hailed as a “classic” by the Los Angles Times. In addition to writing for such sites as Firstofthemonth.com and Africana.com, Eric has contributed to several books of cultural criticism including “Jack Bauer for President: Terrorism and Politics in “24,” “So Say We All” and “Boarding the Enterprise.” He is a graduate of Stanford Law School and lives in Los Angeles.