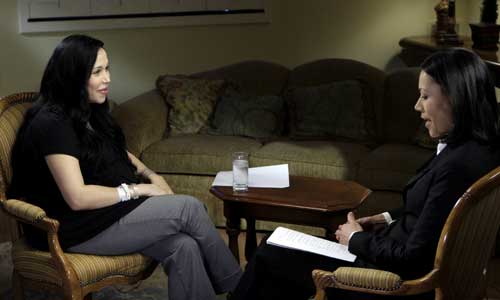 Here are some highlights lowlights from the NBC Interview:

For seven years beginning in her teens, Nadya Suleman tried to have a baby. She suffered three miscarriages. She tried artificial insemination and fertility drugs, to no avail. By 2000, a back injury and her inability to bear children had sent her into a deep depression, in which she told a psychiatrist that she had suicidal thoughts.

On many days, she did not get out of bed. One doctor asked her what activities she had given up. Her answer: “Everything.” That same year, she tried in-vitro fertilization and became pregnant.

“I just longed for certain connections and attachments with another person that I — I really lacked, I believe, growing up,” Suleman said. “I didn’t feel as though, when I was a child, I had much control of my environment. I felt powerless.

And that gave me a sense of predictability. I — reflecting back on my childhood, I know it wasn’t functional. It was pretty — pretty dysfunctional, and whose isn’t?” Suleman didn’t elaborate in the portion of the interview released by NBC (more will be broadcast on “Today” on Monday and on “Dateline NBC” on Tuesday). But she said her childhood made her yearn for many children of her own.

“That was always a dream of mine, to have a large family, a huge family,” she said.

Hmm. I wonder if it was always a baby’s dream to have 13 brothers and sisters and perhaps struggle with life because a mother thought of her dreams and wishes before what is right and better for the children.  Just because you can have 14 children, doesn’t mean you should have!-Dr.FB