Posted at 13:33h in News by drfunkencherry 2 Comments
0 Likes
Share 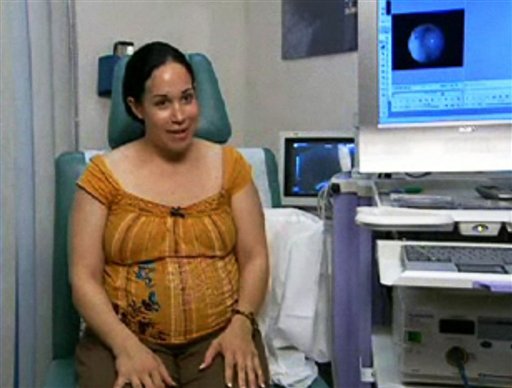 DISCLAIMER: Dr. Funkenberry is not liable to pay for any damages to computer equipment, including laptops, monitors, and keyboards, caused by projectile spewing of coffee, soda, lunch, or liquids of any kind upon reading the following story. Reader takes all responsibility for any adverse effects, including and not limited to, long-term or permanent loss of ability to maintain an erection or the shriveling up and falling off of your tallywhacker. Proceed at your own risk.

You may want to take a shower after reading this.

Vivid Entertainment has offered Nadya “Octomom” Suleman $1 million to star in a pornographic video. Now Tarts has learned the disgusting details of what they want Octomom to do.

“The number eight is obviously heavily associated with her so we would like to work with that,” Vivid’s CEO Stephen Hirsch told Tarts. “But we would really love just to sit down and talk with her and come up with something she feels comfortable with. We want her to be involved with the whole thing from the plot line to the packaging.”

Hirsch says Suleman has received their offer and is considering it. Suleman did not return calls for comment.

“She’s struggling financially and this is a woman who wants to provide for her kids,” Hirsch said. “This way she can hold her head high and not be using taxpayers money to support her family.”

However, the New York Post’s Cindy Adams is reporting that Octomom has been looking at $1 million houses in the Los Angeles area.

So maybe – let’s all pray – she doesn’t need the money.

UPDATE: Octomom is keeping her clothes on! “Those guys at Vivid video must be nuts!” she told Radaronline.com. ” Who wants to see me naked? Maybe in a year when the baby fat goes away.” Tarts think she’s kidding…?

No word on the working title for the proposed flick for Octomom. That James Bond movie already took the best one. – Dr.FC