23 Mar Prince’s 3 Shows Sell Out! LotusFlow3r.com Will Have More!

Ticketmaster sold out of the 3 Prince shows with fast quickness. But an email sent to members of his mailing list for Lotusflow3r.com gives “tru” fans hope: 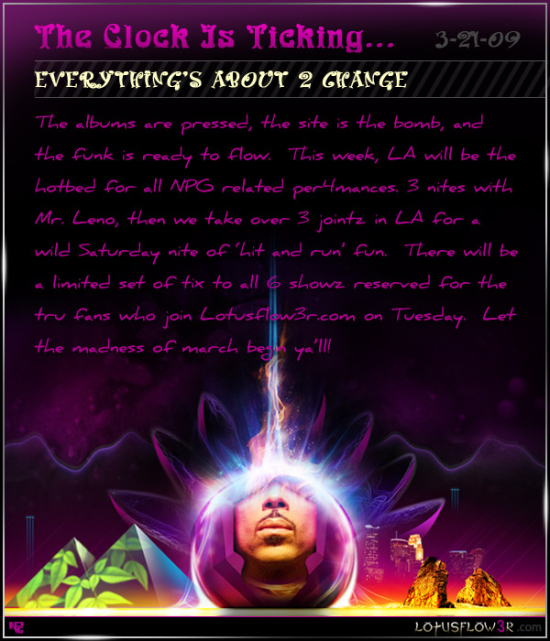 The Galaxy is the bomb. Scott Addison Clay showed it a group of us on Thursday night along with playing the new Cd’s for it.  The reviews are forthcoming.  You can tell Scott put a lot of work into it and worked extensively with Prince to make this more than a web experience but a whole new galaxy.

This Tuesday, Lotusflow3r.com is set to explode, and the only way to get your tickets to those 3 concerts Saturday Night and a cool Leno hook-up is at:

Here is the official press release; ALL THREE PRINCE CONCERTS AT L.A. LIVE
SELL OUT IN MINUTES


LOS ANGELES, CA, March 23, 2009 – In record-breaking time, Prince has sold-out the first show in 7.7 minutes, with the other two shows selling out shortly after that.  He will perform an unprecedented three full length concerts in three completely separate venues all in one evening within L.A. LIVE, the downtown Los Angeles entertainment and sports district this Saturday, March 28th.  These history making performances are in support of the launch of his new website LotusFlow3r.com on March 24th and the upcoming release of his three new studio albums, available for purchase at exclusive retailer Target and Target.com on March 29th as well as at LotusFlow3r.com.

The three full performances will earn Prince the distinction of becoming the first artist to perform at Nokia Theatre L.A. LIVE, Conga Room and Club Nokia all in one unbelievable night of great music.

Prince is slated to launch his new interactive member-based website, LotusFlow3r.com on March 24th and has three new studio albums, LOtUSFLOW3r, MPLSoUND and Elixer, a collaboration with his new protégé Bria Valente, which will all be available for digital download on his website at launch time and also bundled together in a three-disc set for only $11.98, available for purchase exclusively at Target and Target.com.  The new website will offer fans exclusive content including digital downloads, concert tickets; sneak peeks at upcoming events; live concert footage; exclusive imagery from past albums and other exclusive photos for an annual membership fee of $77.