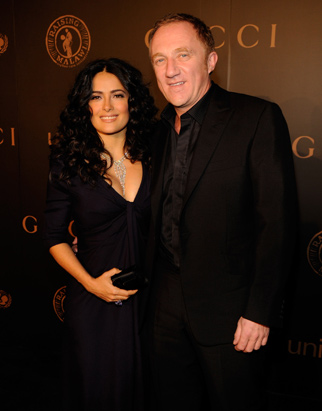 Yeah, it’s true, the only reason why I posted this story is so I can look at Salma’s beauty….again…..SO WHAT!! 🙂
Mr. F. H. Pinault was held hostage in a taxi cab for over a hour while 50 angry workers/protesters tried to “boss-nap” the billionaire. Pinault was attempting to leave a board meeting when this napping  took place. This is the latest attempt in France over the past month.  This vicious attack stems from 1,200 job cuts at two of his stores.

Pinault is the Chief Executive Office of Luxury Brands firm PPR which owns Gucci and Yves Saint Laurent. (among others)

The Tycoon Billionaire was freed after riot officers cleared the protesters.
“Mr. Pinault is keen for workers to air their views, and even allowed a union delegation into the latest board meetings”, a Spokesperson for PPR stated.
Mr. Hayek is said to be one of France’s highest profile public figures.
Now I know why Salma is in love………