05 Apr Eminem: Run DMC, “Two Turntables And A Microphone, That’s All It Took To Change The World” 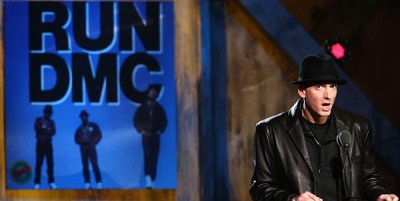 Eminem stepped out in front an audience for the first time in, what seems like  an eternity to induct Run DMC into the Rock and Roll Hall of Fame on April 4th.  Hey M&M why so much black?  No!!! You can never be a member of Run DMC, take the hat off.  So Really,  What are you trying to hide?  Humm…is that why we haven’t seen yo’ a** in a while?  You been dunkin’ the donuts?

Run DMC is the second Rap/hip hop act to be inducted,  Grand Master Flash was inducted in 2007, both groups coming straight from Queens.

“Two turntables and a microphone, that’s all it took to change the world.  Three kings from Queens made rap music in the b-boy stance a global phenomenon”, Eminem said of the group members, Joseph “Reverend Run” Simmons,  Darryl McDaniels, and  DJ Jason (Jam Master Jay) Mizell.

Run DMC dominated the Hip Hop World in the late 80’s and early 90’s.  So, where is Run DMC now?  Simmons is now Rev. Run and has a hit Reality show, McDaniels raps/ Deejay’s under D.M.C, and  sadly Jam Master Jay was shot to death in a Queens recording studio in October 2002.  The 2002 shooting is still unsolved.

It’s nice to see Eminem out and about.  Is he getting ready to tour again?  Will his new CD be as bangin’ as the first one?  I hope it’s his hottest yet…and btw, before I forget, he really needs to drop the black outift.  Is he a “K-FED” underneath it all?……OUCH