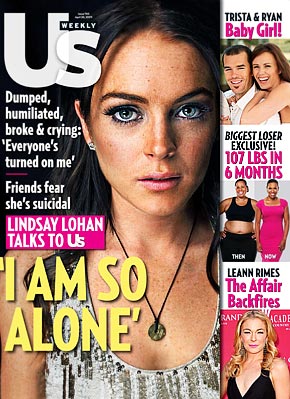 Lohan tells on her break-up with Sam.  Public cry for help, or publicity stunt? Damn someone need to take this sh*** and make a telenovela.

Ronson broke it off last Friday, after nearly two years of dating.
She hired five security guards to keep Lohan away for her sister Charlotte’s after party at the Chateau Marmont.  Lohan was NOT allowed at the debut of Charlotte’s new clothes line at JC Penney earlier that day.
The next morning, Sam changed ALL the locks on the doors at her Hollywood home.
So is Lohan going back to her hotel living?  How long until she is seen with a MALE hottie?  Are they really, truly over?  Did Sam really cheat on Lindsay? Is Lindsay really as devastated as she says she is?
Lohan was seen at Shamrock Tattoo on Sunset Blvd on Tuesday Night.
Tattoo your blues away……