09 Dec VIDEO: Prince Surprises The Ladies of “The View” 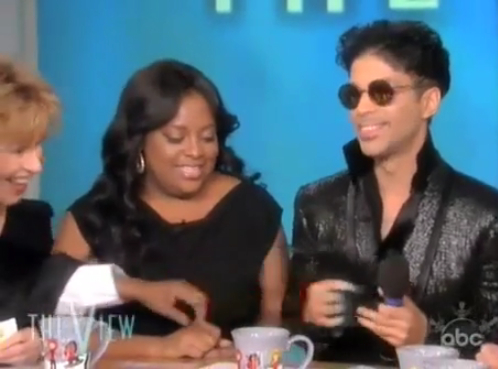 Prince appeared on Thursday's episode of the View. Click to watch the video.

Prince dropped in on the ladies of the television show “The View” this morning. As he entered the stage, he presented each with a pair of tickets to his upcoming December 18 concert at NYC’s Madison Square Garden. Lucky ladies – it’s sold out!

View host Sherri Shepherd looked like she was about to faint when Prince’s chair was placed beside hers. She asked Prince to say into the mic “Sherri I love you” (he obliged) and then like a crazed fan, asked if she could keep his gloves (he again obliged). But when she told Prince she has always wanted to sleep with him, he made a quick, humorous exit.

Prince’s string of concerts in NY start next week with shows at the IZOD Center in New Jersey on December 15 and 17th (tickets still available!), and Madison Square Garden on the 18th (sold out). He also recently announced an additional show at MSG on January 18th – tickets go on presale today (password: tribute) or tomorrow to the general public. You don’t want to miss this!

Where else will Prince pop up in NYC while he’s there? We can’t wait to find out. – Dr.FB