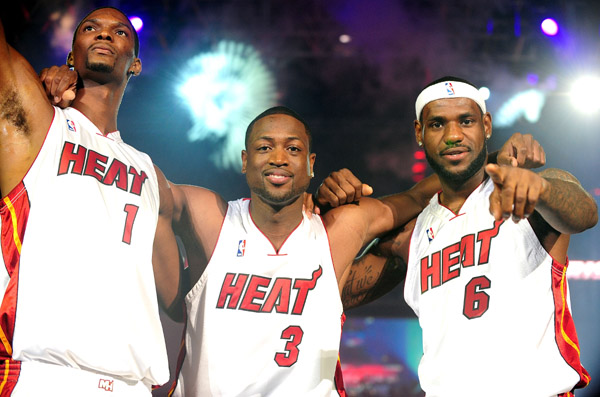 Tony Romo married Candace Crawford at a private event in a tent in Dallas over the weekend.  The couple have been together for 2 years and Romo proposed late last year.  Candace is the sister of Gossip Girl star Chace Crawford….

Shaquille O’Neil announced his retirement via Twitter yesterday 19 years in the game.  Shaq, who started his career in Orlando and came to the Los Angeles Lakers and won 3 championships with Kobe Bryant before their relationship exploded and Shaq was traded to the Heat where he won 1 more ring.  He finished his career in Clevelend and Boston.  Although Shaq wore enemy jerseys, The Lakers announced they will be retiring Shaq’s Jersey next season….

LeBron James is just 3 games away from winning his first ring and from the looks of what the Miami Heat did to the Dallas Mavericks in game 1, they may already be sizing up their ring finger. Dirk Nowitzki tore tendons in a shooting finger and aside from Dirk, Dallas’s offense was stagnant.  The NBA Finals continue tonight with game 2, where Miami is looking to take a 2 game lead over the hurting Mavericks……Dr.FB

Diagnosis:  Only A Week Away Til You Can’t Use Lebron’s Ring Jokes