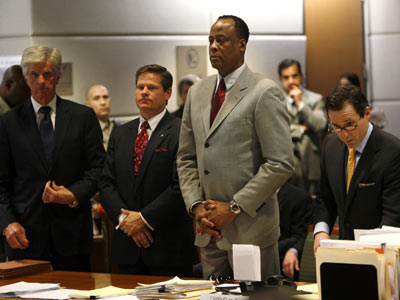 Dr. Conrad Murray was sentenced to 4 years in prison for the death of Michael Jackson. Murray’s time will be spent in L.A. County Jail.

The judge appeared often upset and brought up a documentary that Murray shot with MSNBC where Murray said Michael’s death lies with Michael not him.

Murray will also have to pay “appropriate restitution” to the Jackson Estate and Michael’s kids at a later date.  The prosecution is hoping for a $100 million dollars, but no amount was set yet.  They were also hoping for money from Murray to pay for the almost $2 million funeral costs for Michael.

Michael’s family released a statement to the court before sentencing:

“We are not here to seek revenge.  There is nothing you can do here today that will bring Michael back.” “We respectfully request you impose a sentence that reminds physicians they cannot sell their services to the highest bidder.”

Murray could only get a maximum of 4 years in prison, but we ask, did the punishment fit the crime?-DocFB