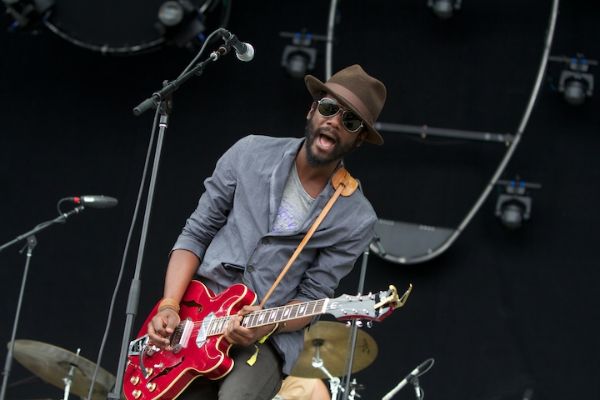 If you do not know who the funk Gary Clark Jr. is, you must be living under a rock. He will be performing on Jimmy Kimmel Live Feb. 6th, then supporting Eric Clapton on tour, all while teaming up with Jimmy Page for a new ad campaign for Varvatos.

Since releasing his debut EP The Bright Lights at the end of 2010, Clark has enjoyed a steady drumbeat of critical acclaim and been embraced by music fans for his fiery blend of rock & soul and blues & hip-hop with a self-styled, innate cool that Rolling Stone said (in its lead review) owes “as much to Kurt Cobain and the Ramones as Buddy Guy and John Lee Hooker,” going on to add that Clark’s “shape-shifting calling card EP is grounded in tradition while standing on the brink of change.”

The 28-year-old Austin native has become a legitimate break-out phenomenon across the globe, and the best part is that it has all occurred in the most organic way imaginable: through hard touring and a commitment to giving his all night after night with enthralling, sweat-soaked live performances and powerful music that presents Clark’s unique interpretation of styles both old and new delivered in his own inimitable way.

Throughout the year, Clark was heavily in-demand as a live performer, the only one who made the rounds of nearly every major American music festival, including Bonnaroo, Coachella, Sasquatch, NOLA Jazz & Heritage Festival, Jay-Z’s Made in America, Metallica’s Orion Festival, Dave Matthews Band Caravan, Osheaga, and the Austin City Limits Festival, where Clark and his band set a new day-time attendance record. He was also invited to perform on Good Morning America, The Late Show With David Letterman (twice), The Tonight Show With Jay Leno, Late Night With Jimmy Fallon (twice), Conan, and Austin City Limits (an episode that will air Feb 16th).

In October, Clark released his album Blak And Blu, which debuted on the Billboard Top 200 Album Chart at No. 6 and received raves from many major music outlets, including Rolling Stone (in yet another lead review), The New York Times, which called Clark “a guitarist of deep magnetism and tremendous feel,” and Spin, which declared: “There truly is nobody else like him around.” The accolades have kept coming. Since the release of Blak And Blu,
Clark has appeared in the pages of Rolling Stone (numerous times), Spin, Guitar World, Vanity Fair, Vibe, People, Entertainment Weekly, Wall Street Journal, Associated Press, Esquire, Guitar Player (Clark was the first emerging artist to grace their cover in over 15 years), and countless others. High profile and influential media and news outlets also praised the artist and his album including, CNN, MSN, NPR, Huffington Post, AOL, MTV, Grantland, Life+Times, ESPN, Reuters, WireImage, Dial Global, and many others covering music and culture. As 2012 drew to a close, Blak And Blu found its way onto Year End “Best Of” critics lists around the world.

A myriad of song placements in TV and film throughout the year have played an integral part in introducing the music of Gary Clark Jr. to diverse audiences. Blak and Blu tracks “Don’t Owe You A Thang,” “Bright Lights,” “Ain’t Messin’ Round,” and “Glitter Ain’t Gold” have been featured in such TV shows as The CW’s Vampire Diaries, USA’s Suits, ABC’s Nashville, and A&E’s Longmire, as well as such films as Think Like A Man, Trouble With The Curve, and the upcoming Stand Up Guys. Clark was also ESPN’s Artist of the Month in October. Having discovered Clark through word-of-mouth, music supervisors featured his music consistently throughout 2012, which left an impression on TV viewers and film-goers who may not have been aware of him otherwise.
After wrapping up tours of the U.K. and Australia, Clark made a triumphant return to the U.S. in November to perform a string of instantly sold-out tour dates on both coasts including three nights at the Bowery Ballroom in NYC and three nights at the Troubadour in L.A., each of which sold out within an hour. Clark also performed as part of the 35th Annual Kennedy Center Honors – a star-studded event attended by President and Mrs. Obama, and honoring Buddy Guy, Dustin Hoffman, David Letterman, Natalia Makarova, and Led Zeppelin.

To cap off the year, Clark joined rock icons The Rolling Stones for the band’s first U.S. “50 and Counting” concert at The Barclays Center in Brooklyn, NY, in early December. The Stones were so taken with Clark that they invited him back to join them for their global pay-per-view concert that blew the roof off New Jersey’s Prudential Center on December 15th.

Clark is wrapping up a on tour in New Zealand and Australia with plans to return to Australia in February where he will perform at the annual Big Day Out Festival. Clark and his band will return to Los Angeles to appear on Jimmy Kimmel Live! on Wednesday, February 6th, on the outdoor stage performing “Ain’t Messin’ Round” and “Numb” from Blak and Blu. Fans can also expect some exclusive online performances as well.

Tours of Europe in February and March, plus a major tour of the U.S. in April, are planned with details to be revealed soon. We can confirm at this time that Clark and the band have accepted an offer to support dear friend Eric Clapton for a string of dates in April and May that include:

Finally, the latest campaign for the John Varvatos brand brings together music legend Jimmy Page, guitarist for “the greatest rock and roll band of all time” Led Zeppelin, paired with the 28-year-old emerging American music talent Gary Clark Jr. The images were shot in London by Danny Clinch, against a textured backdrop at the historic Rivoli Ballroom, where the two sharply dressed subjects stand out in an iconic black and white portrait.-DocFB