01 Apr Travis Barker And Shanna Moakler Call It Quits For The ??? Time 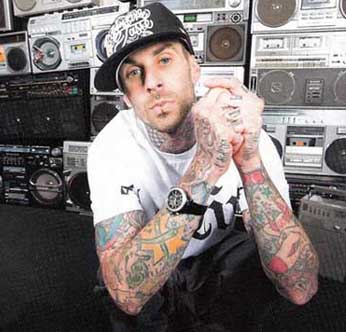 Is Mr. Barker finally over Shanna Moakler?  Maybe after last nights fiasco, he will change his ways, and ditch that chick once and for all! (finger’s crossed)

Last night cops where called to Barker’s home.  Apparently a heated fight broke out, and Shanna started to freak out and became irrational.  This Morning a Rep for Travis confirmed they have spilt.  Travis wants to focus and his music and his children.  He has no time for drama.

Shanna claims she is tired of having to play out their relationship to the press.  Humm, isn’t she the one bloggin’ about their romance on her MySpace? I do follow Travis on Twitter, but he rarely says anything about their love life.  He is more about his music and his kiddies.  I think I’ll stick with team Travis.

Is Travis finally done with Shanna?  Did she really cheat on him while he was in the hospital? I guess we can take them off of our wedding gift list.