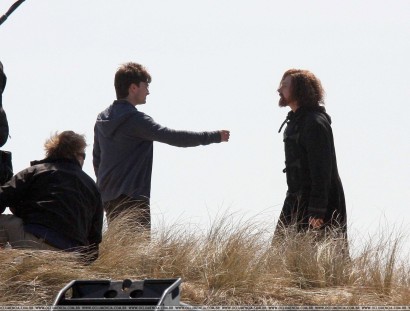 Harry Potter fansite Oclumencia.com.br once again has some of the first photos from filming that began early this morning in Wales. Daniel Radcliffe, Rupert Grint, and Emma Watson are on location filming the “Shell Cottage” scenes for the final Harry Potter installments Deathly Hallows Part 1 and Part 2. Also on set were Helena Bonham Carter (who plays Bellatrix Lestrange) and Warwick Davis. Davis usually plays Charms professor Flitwick, but will also play the goblin Griphook in these scenes for Hallows.

In the photo above Grint on the right is almost unrecognizable, as he dons a wig and beard to play Ron Weasley in disguise for a daring break-in the trio will attempt at Gringotts Bank.

Half-Blood Prince isn’t even out for another two months and I’m already getting excited for Deathly Hallows.