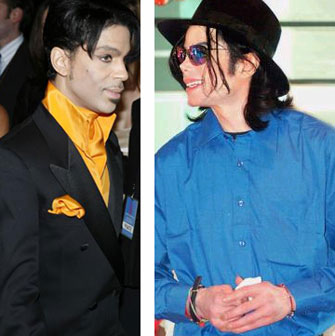 Prince and Michael Jackson were friendly rivals?  Seriously? According to former band members of the Purple One, it’s true.

A report in the Startribune, Bobby Z., Prince’s drummer for the Revolution, remembers watching the 1984 Grammys with Prince as Michael Jackson swept the Grammys.

“We were watching rough cuts of [the movie] ‘Purple Rain,’ and we knew that’s where Prince wanted to be the next year,” Z said Thursday.

Michael Jackson even showed up to 2 Purple Rain shows backstage.  Although Michael Jackson did want to work with Prince a few years later, Prince declined due to lyrical differences.

Michael Bland insisted they got along fine.  “They’d shoot hoops at Paisley Park,” Prince’s studio/home in Chanhassen. “We used to get packages from MJJ Productions [with] footage of Sly Stone performing in Europe. Prince would pop it in the VCR, and we’d watch it.”

Prince even defended Michael at a press conference in 2000 where he said something along the lines of “we don’t really know what is going on with him and maybe we need to chill on that.” (I can’t find the original transcript so paraphrasing people.)

Personally speaking, I did see Michael Jackson attend one of Prince’s shows at 3121 Las Vegas in 2006 with Wil I Am of the Black Eyed Peas and Chris Tucker. Michael did not make the after show as planned where he was to be seated with Michael Jordan.

Recently, Prince has been performing Michael Jackson songs in his sets, “Don’t Stop Til You Get Enough” and recently “Dancing Machine” by the Jackson 5

It’s nice to know my favorite artist Prince had an interesting connection with Michael that many of us did not know, beating him in hoops I am sure. -Dr.FB