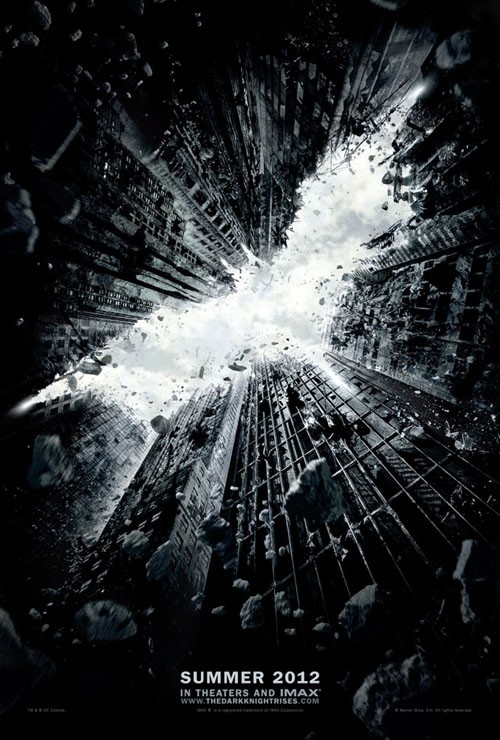 It does not come out for a whole year, but that is not stopping Warner Bros. Pictures from releasing a movie poster for it now.  “The Dark Knight Rises” is the 3rd Batman movie to be directed by Christopher Nolan and star Christian Bale as the caped crusader straight out of the DC Comics made famous by Bob Kane.

Falling skyscrapers in the shape of the bat.  Hmm.  This Dark Knight will be different as he will be a wanted man by the police for the “murder” of Two-Face, Harvey Dent.  Although no one knew the monster that Dent became as to protect him.  There is no actual guarantee that Dent is actually dead either.

Levitt stared with the late Heath Ledger in the movie “10 Things I Hate About You” so there is a connection between the stars and the Dark Knight Trilogy.

The movie also stars Anne Hathaway (Who is very excited to be attached to the filming and blown away during the first few weeks of filming) and Oscar winner Marion Cotillard.   Also in the movie will be Liam Neeson, , Tom Hardy, Michael Caine, Juno Temple, and Morgan Freeman.

It may not open until July 20th, 2012 but the Doc is looking forward to making sure he has no surgeries or appointments that day.-Dr.FB

Update: Levitt Is Playing The Role Of Alberto Falcone