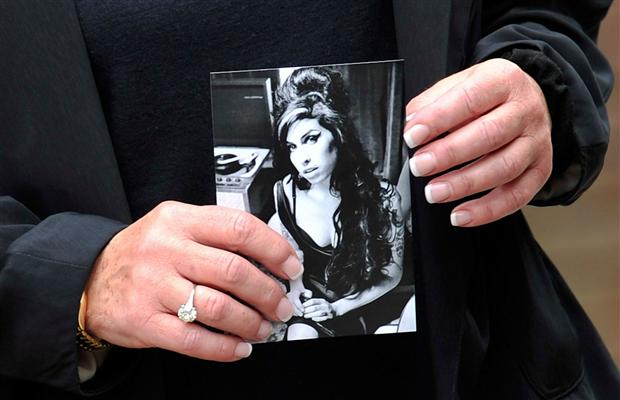 I am at a loss for words as Amy Winehouse had her funeral service today and is will  be cremated before being buried.

According to People.com and others, Amy’s father Mitch provided a somber and humorous eulogy for Amy.  Producer Mark Ronson, who called Amy his musical soulmate, and produced her 2006 album “Back To Black” attended along with Kelly Osbourne.  Her boyfriend of the past two years, Reg Traviss was in attendance.  Not in attendance was her ex-husband Blake Fielder-Civil who is serving time in prison and was not granted permission to attend.  Amy’s father made it known that Blake was not welcome at the funeral.

The Carole King classic “So Far Away” was played at the Jewish funeral and all were asked to join in and sing.  Amy is to be cremated after the service.

Music lost a woman who will now live in infamy and it could be some time til we hear a voice as powerful as Amy’s.  Mitch Winehouse however, lost a daughter.  Imagine you having to bury your child.  No matter the issues she had.  No matter the people who say they all saw this coming.  Burying your child or loved one is one of the hardest things I could ever imagine doing.

Mitch Winehouse had this to say at the end of the funeral;

“Good night my angel, sleep tight; Mummy and Daddy love you ever so much.”
-Dr.FB
Diagnosis:  We Will Miss You Amy……