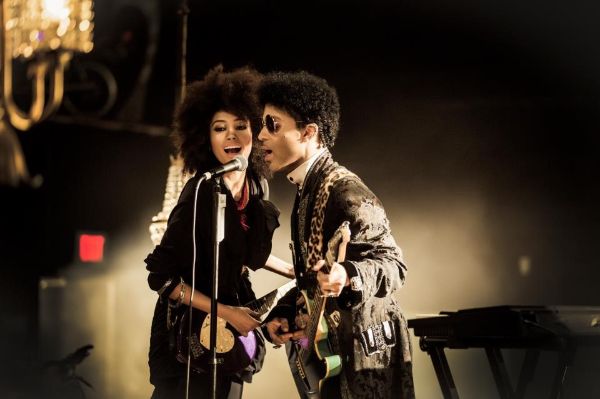 Prince is all about Livestream. In a conversation with him at Paisley Park, he expressed this to me. He compares Livestream to a boxing match that you watch live but if you already know the results, it is not as interesting to watch. Some would say with at least a boxing match, you know when it is going to happen, but that  doesn’t concern Prince.

“Livestream is the future. Livestream is now. We go live and you are either there or not. It is about being in the now.”

For the past month, Prince has used livestream to drop rehearsal jams, play unreleased tracks, put his songs in the mix, and have the camera on while he was performing at Paisley Park a couple weeks back.

It is apparent in our conversation that he is having fun with the Livestream concept, which usually start late here in the West Coast, while on the East Coast, it is in the middle of the night. For overseas fans, they have been trying to make their sleeping schedules around it while for some it airs in the middle of the day. He doesn’t want to give people too much of a heads up about it.

Also, there is no archive of the Livestream…at least not yet. You either catch it or you don’t.

He talks about me doing shows on the Livestream and later that night, he has me interview fans outside Paisley Park before they entered. The Livestream app allowed us to film with a cell phone but the lack of a microphone outside of the cell phone’s built-in one made the experience not so great for those watching on Livestream.  Next time.

The audio is on point on the Livestream’s Via 3rdEye TV which you know is important to Prince.

On several of the 3rd Eye broadcasts, Janelle Monae’s “Q.U.E.E.N.” remixed by Joshua Welton has been played. Prince is obviously a big fan of Janelle and we talked about her performance on the B.E.T. Awards.

Prince: The B.E.T. Awards. They were not going to have  Janelle on the show.

Prince: Exactly. That was my response. So I called up B.E.T. for her to get her on the show. Janelle is a talent and they were not going to have her on?

Prince: Janelle was on and she and Erykah knocked it out!

(Stephen Hill of B.E.T. confirmed that Prince did make the call for her and he was going to give her the opening spot after the phone call, but it was taken so he let her close the show.)

Prince: Andy Allo put out “Superconductor” on her own. She hustled. From doing a show on the g4 network to everything she does. “Superconductor” is great. We might have to contact Kobalt music, add a few songs that I duet on  and release it as “Superconductor Reloaded”…..

A smile comes across his face while talking about “Superconductor Reloaded” and he has a right to smile. The album is phenomenal and the addition of tracks such as “What It Feels Like” (tentative title) which was played on the Livestream went over well with fans and can only help.-DocFB

Diagnosis: This was just a small part of the interview we had with Prince at Paisley Park. Expect more soon as we talk bootlegs and unreleased versions of songs with him.