11 Mar Britney Spears Drops Kids Off At The Pool; New Video To Debut 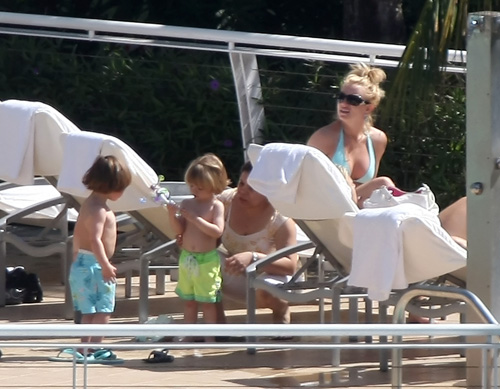 Britney Spears, recovering from a week’s worth of concerts and her “pu**y hanging out” on Sunday, relaxed at a hotel in Miami on Monday and Tuesday.

Britney’s new video, “If You Seek Amy”, the song that Tried PR Controversy and failed with a play on words, will debut on Virgin Mobile this Thursday.

I was on a little bit of a Britney ban for the past month or so due to things that had to do with the tour and someone who slammed her all the time while we had her back during the craziness that happened last year, and felt her associating herself with this person was caving in.

I got over it and hope Britney’s hoo-ha pops out in a city near you.-Dr.FB