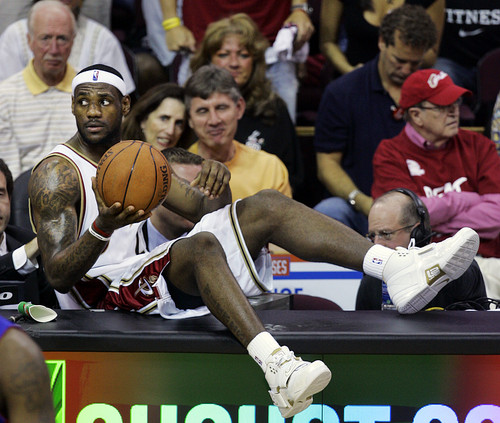 I am going to say it; I never liked Lebron James.  There was something about him that just rubbed me the wrong way.  Last week, he gave me a reason to not like him so I don’t feel guilty for my feelings.

Let’s be real here; we all knew that Lebum was not going to resign with Cleveland or else he would have done it last year when a huge offer was on the table.  This was planned since at least 2006 with Dwayne Wade, Chris Bosh, and Lebum.  They all signed deals in 2007 to be free agents in 2010 with hopes of playing somewhere together.

The NBA says they will look into player tampering and Marc Cuban, the owner of the Dallas Mavericks, is hoping David Stern takes off the kid gloves with this situation.

Los Angeles Laker free agent Derek Fisher met with the Heat on Saturday and Lebum was there to greet him and ask him to join the darkside….at least i think that is what he asked.

My sources say Fisher has no intention of signing with the Heat, but is letting the Lakers know he has options and to stop low-balling him in contract negotiations.

My advice to Lebum is to start laying low and let this blow over.  That being said, the Heat are going to get a LOT of coverage over the upcoming NBA season.  Expect TNT to carry a lot of games.  Expect a Christmas game between the Heat and the Cavs in Cleveland.  They are going to be the team that everyone is going to root against.   Kind of like the Dallas Cowboys in the NFL.  People may not have a favorite team but they tune in just to root against them and that means ratings.

Note to Jerry Jones.  I love the Dallas Cowboys.