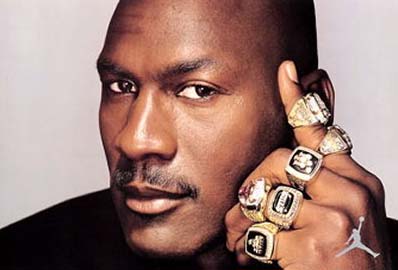 Bill Parcells said it best.  “He hasn’t won anything yet.  Don’t anoint him.”  He was speaking of Tony Romo but the same can be said about LeBron James.

Until 2 weeks ago, LeBron James was called the “next Michael Jordan” and nicknames of “King James” and “The Chosen 1” when he doesn’t have a ring to his name.  Yes, there is a reason why I chose a photo of Michael Jordan with all those rings.  James will never see that many rings unless Pat Riley let’s him borrow his.

I have been waiting to hear what Michael Jordan thought of Lebum’s decision and it did not disappoint.

“There’s no way, with hindsight, I would’ve ever called up Larry [Bird], called up Magic [Johnson] and said, ‘Hey, look, let’s get together and play on one team,'”

“But that’s … things are different. I can’t say that’s a bad thing. It’s an opportunity these kids have today. In all honesty, I was trying to beat those guys.”

Charles Barkley even weighed in stating:

“He’ll never be Jordan,” “This clearly takes him out of the conversation. He can win as much as he wants to.

“There would have been something honorable about staying in Cleveland and trying to win it as ‘The Man’ … LeBron, if he would’ve in Cleveland, and if he could’ve got a championship there, it would have been over the top for his legacy, just one in Cleveland. No matter how many he wins in Miami, it clearly is Dwyane Wade’s team.”

Miami and most of Florida do not see the problem with James going to Miami.  From the way he handled it by having an hour special to announce it and saying “I am taking my talents to South Beach.”  It wasn’t so much arrogance, but that he still hasn’t won anything.

Make no mistake about it; his odds of winning one or a few went up by joining Wade in Miami, but his legacy is tarnished.  Sometimes, that means more.  If he wouldn’t have done the 1 hour special, people still would have been upset.  If he went to Chicago, people would not be as pissed because he would be the man.

Last week’s cover of Sports Illustrated said it all with the cover shot.  Lebum looking over Wade’s shoulder.  It’s clearly not his team and he will never have to worry about being compared to Michael Jordan ever again.-Dr.FB