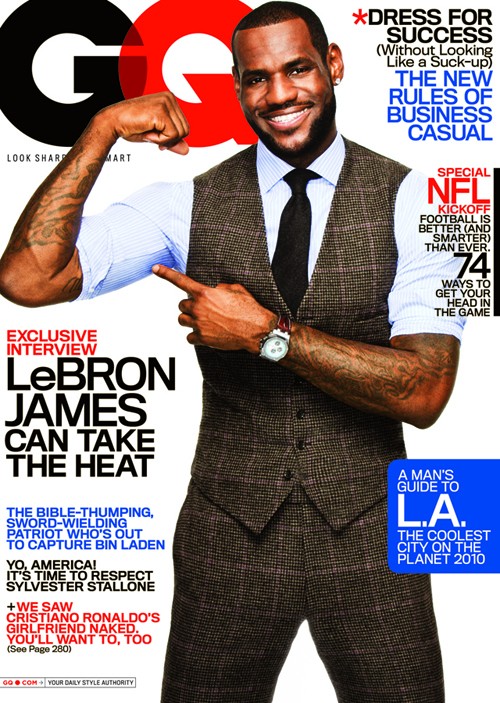 We were almost not going to call Lebron James Lebum James today..until we read the GQ cover article featuring him and him talking in the 3rd person.

“I don’t think he ever cared about LeBron. My mother always told me: ‘You will see the light of people when they hit adversity. You’ll get a good sense of their character.’ Me and my family have seen the character of that man.”

Despite him turning into the wrestler “The Rock” in these comments, he is somewhat right.  As much I think James TV special announcing his decision to leave Cleveland, Gilbert’s comments were too much.

He also talked with GQ if he would ever return to Cleveland:

“If there was an opportunity for me to return and those fans welcome me back, that’d be a great story.… Maybe the ones burning my jersey were never LeBron fans anyway.”

That would be something.  The burning of the jerseys was too much as well, even if you do feel betrayed as a fan.

So far it seems his friends and family are his biggest fans still;

“They’re happy to see me happy. That’s what they can see in my face. They say: ‘It’s been a while since we’ve seen you look like that.’”

Are you over James decision yet?-Dr.FB