3rdEyeGirl TV last night returned to livestream where what started as a picture test turned into unreleased rehearsals, remix’s, and more!

I get the email that the livestream is about to begin and see others join in around the same time as me. My plans for the night were to clean up my desk and drawers so this worked out perfectly.

A picture test of a candle next to a board was all that was seen before a laptop was placed on the board. A photo on the laptop of what looks like the inside of a door with a handle and see through glass is there for us to see. You see people moving/blocking the camera as 3rdEyeGirl says “Charlie Murphy is here.” OK. Should we shoot the jay? (BTW, I asked PRINCE before the finals which team he was choosing. The response was the Heat. 2 things in life I will tell you to do; Number 1. Always bet on black. Number 2. Whichever team PRINCE picks in the Finals, will win, and Ray Allen will most likely be on that team.)

We are about 17 minutes in on this photo test. Then a little puppet…on a stick….ala Jeff Dunham appeared. Then the next puppet became larger, looking like a Muppet character with glasses. Then incense is lit. Is PRINCE trying to seduce us? 3rdEyeGirl lets us know that PRINCE is serving pancakes. OK, but where are the grapes?  The chat room is enthused.  It is different than the Spreecast show on Wednesday and the chat that accompanies it.

I sit around cleaning my desk out which was the original plan on this Friday night which was making me laugh as I stared at incense slowly burning. Was PRINCE going to give us something soon that we wouldn’t know how to handle? We are 45 minutes in when a shadow appears and puts the incense out.

47 minutes and 23 seconds in, a rehearsal of “Sticky Like Glue” plays. It is around 10 minutes in length, although it did not play from the start. “Sticky Like Glue” is from the 20Ten album which to this day, has not been released officially in the United States. A photo appears of 2 cats getting close while this funk workout just plays. Hotness! Cora Dunham on the drums and Morris Hayes on the keys along with the NPG Divas makes me know that this rehearsal is from the year 2010. We wish we had a guitar player to slide as well PRINCE.

It ends. Are we done? How do you follow a PRINCE? With a Q.U.E.E.N. A remix that we are calling the Paisley Park Remix of “Q.U.E.E.N.” by sisters Janelle Monae and Erykah Badu. A shorter version of this was played the night before along with video footage of 3rdEyeGirl funking out to “Let’s Work” along with clips from Montreux 2009 on a lap top.

With Janelle’s jam is a photo of Kristin Wiig from Saturday Night Live giving a funk face. I tweeted this was happening and Janelle Monae retweeted it to her followers. This experience is catching on.

The “Let’s Work” rehearsal jam from last night that had video with it is now a longer audio clip with PRINCE obviously playing that bass Ala slap bass style like Larry Graham. A bass is stuck out in front of the photo of Wiig at times. Are we gonna get a live bass solo or are we being teased? 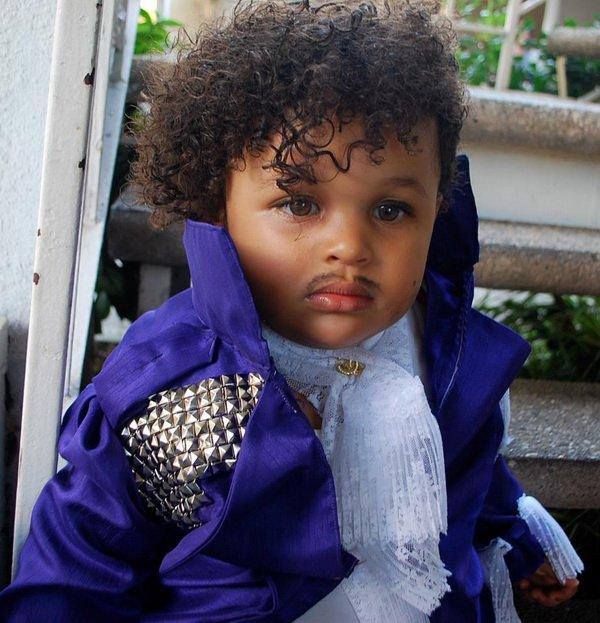 A photo of a child dressed like PRINCE back in the “Purple Rain” era is shown while “Never Be Another Fool” is played. Rumor has it that it is Chelsea Rodgers singing on it. Was that NC backing her up though? Hmm. Whomever it is, it is banging!

After that “Breakfast Can Wait” kicks in. Guess no one is getting pancakes then. This is the first released jam played tonight, a song that you can buy for .88 cents on 3rdEyeGirl.com. A photo of PRINCE playing pool circa 2006 appears on the screen.  Don’t ask how I know that.  I hope he doesn’t play pool as well as he plays table tennis though.  The doc got his license revoked from playing.

Now we are treated to live footage of the Welcome 2 Australia tour of “Play That Funky Music” and it was fire.  People forget how vast his vault is.  He could drop something from 1986 just to remind you.  Don’t think he won’t!  Australia, you said you was funky.  Well, that video proved it.

After that “Goodbye” from the Crystal Ball set from 1998 plays. I guess this really is goodbye…for last night.  My desk is almost clean by the way.

The 45 minutes of photo testing aside, the past couple of nights is showing a vision that PRINCE had 20 years ago with something he called “The Beautiful Experience” where for $19.99 you had a private concert through your computer where the user had an interactive experience like no other.  Technology may have finally caught up to PRINCE and what he wanted to do.

So what does this mean?  Should we load up on peanut butter cookies?  Will we get more of a heads up or will we just have to be in the moment and if out and about, hope our devices have enough juice to watch everything, burning incense and all?

2013 has been a big one for PRINCE and for PRINCE fans if they have been paying attention.  Through 3rdEyeGirl.com and other avenues, there has already been almost 2 full CD’s worth of music.  I will let the StAnS out there figure out everything and try to prove me wrong.

With the livestream on 3rdEyeGirl TV, you cannot archive anything and that is how we believe PRINCE wants it right now.  You have to be there in the moment or you miss it.  If you watched it live, you could still have it on your computer to rewatch.  If not, you can read about it here after the fact.

We are hoping that the rehearsal for “Sticky Like Glue” and “Let’s Work (Instrumental)along with “NBAF” make it onto 3rdEyeGirl.com.  As for the Monae track, that could be a little tricky with her being signed.  We will see.

This material is just too fricken good to only be viewed and listened to once.

The experience for some who miss it, it is frustrating.  For those that have been able to watch it, it is indeed a “Beautiful Experience” big time.-DocFB

To continue this experience, join 3rdEyeGirlTV

To purchase some experiences, go to 3rdEyeGirl.com