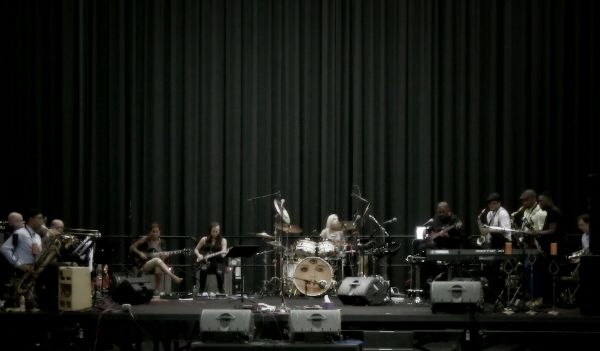 It was a Saturday night PuRpLe party with 3rdEyeGirl TV tonight!

Night 1 was “A Love Bizzare” live from Paisley Park.  The second night was Montreux clips such as “She Spoke 2 Me” played.  The 3rd night was “The Beautiful Experience” and tonight was the Saturday night purple party!

If U haven’t already, make sure to sign up for 3rdEyeGirl TV via livestream to get an email alert as they go LIVE!

1st, they let us know that “Ida was getting cocky on the bass, saying she will beat him on the bass tonight.” Then “Donna and Hannah were laying down their parts on “Breakdown” at Paisley Park in Studio C.”

Then we presume Joshua Welton was with his back to us with the message “Stay Wit It!” on his outfit started playing “Rock & Roll Love Affiar Remix 7 instrumental” and then “Nothing Compares 2 U” with Rosie Gaines.

Then it got real interesting! To find out what was played, click here for more….

The NPG and the NPG horns along with a funky guitar player went into a long Sly & The Family Stone jam along with video so we can see Hannah playing the drums. The video went off  with an NPG Records 2013 trademark. Then the jam continued with audio only and a picture of the horn players with more of a Sly jam and a little Maceo for good measure.

They then covered Emeli Sandé “Next To Me” with Shelby J. and Liv Warfield really chiming in.  I could hear Elisa Fiorillo as well.

They then went into a rehearsal of “Musicology” with PRINCE on vocals and Shelby J. very clear on this.  It was a long funky jam for sure.  “PRINCE gonna be there, but U got to call em!”

Then while in “Musicology”, PRINCE calls out for “EXTRALOVEABLE” and the horns go into it.  Here comes the groove!  Not! As soon as the horns were getting warmed up, the audio of the rehearsal fades! Nooooooo!

OK, we need a video of this version of “EXTRALOVEABLE”  like…LAST WEEK!!!

They then showed some “21 Nights In London” footage including  “Le Freak”  to “A Love Bizzare” and “Pass The Peas”….

The night ended with an instrumental version of “Q.U.E.E.N.” by Janelle Monae and Erykah Badu.  This time, a guitar part sure to be the funkiest guitarist in Minneapolis was laying it down!

Then just like it was all over, advising everbody (without the Y) to get some sleep and they would see us in a few daze.

Diagnosis: Q: How much would U pay 4 these 2 be archived in the future?