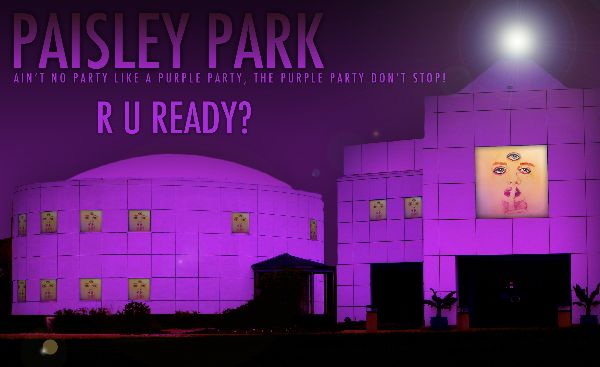 So PRINCE & The NPG performed at his Paisley Park studios this weekend. Friday night, it was a 2 song set with a dance party that followed. Saturday, it was an hour set then the dance party.

Both night’s performances were in the dark. The reason they rehearse in the dark is to test musicians skills under pressure. A few of them cheated with light-up computer lead sheets. 🙂 Overall, they did excellent.

As some of you know, I was asked to come out to Paisley Park Saturday early that same morning. It came as a surprise. They wanted me there by 3 P.M. rehearsal but the earliest flight had me there at 4:30 P.M. I arrive with texts saying that the NPG pushed back rehearsal til 7 P.M. since I was not there. Seriously? Oh man.

As for the rehearsal and other things that happened, that story will come soon.

I am back at Paisley Park around 11 P.M., a little bit before people would be led into the gates. Trevor told me earlier that they wanted me to interview people in line for the 3rdEye TV livestream.

They were doing it with a cellphone and were trying to get the right light for everything. We interviewed about 5 people on the livestream and went to check your comments. After seeing most of you having trouble with the audio, we decided no more interviews. Would have been cool because we were going to being out PRINCE’s first ever guitar he played with for the fans and talk about that. Woulda been cool. Next time?

They were teasing something happening at the Park for about a week on 3rdEye TV but didn’t say what time or how much. That left me pretty much letting you guys know via Twitter and the Facebook Fan Page. As soon as I walked in at 11, I saw them making the board saying “$10.00 cover. $20.00 if U like music.” and I quickly tweeted it out to give people a head’s up.

While people were let in, the main sound stage where the “club” is located is mostly in darkness. I would say they started letting people in around 11:30-11:40 P.M.

Around 11:45, PRINCE went behind the soundboard and 11:50, the band took the stage. I know most of this was played on 3rdEye TV in 2 segments, but here is what happened in it’s entirety.

They started with “People Pleaser” with the NPG Divas, Shelby J., Liv Warfield, and Elisa Fiorillo splitting the vocals for the Andy Allo song. Out comes PRINCE as they go into “Ain’t Gonna Miss U When U’re Gone” which, aside from rehearsals, was the first time they performed the song live. I noticed some elements of Average White Band in the live version I didn’t pick up in the studio version. It was quite cool.

They then went into “F.U.N.K.” with PRINCE having a good time dancing on stage and the NPG Divas backing him up.

Then “Dark” was performed. This was the first time I heard the song since the Sayers Club show in Hollywood last October. It was even tighter tonight.

It was followed by an amazing performance of “Something In The Water (Does Not Compute) with Cassandra O’Neal doing a great solo.

That followed with “Courtin’ Time” which was mostly instrumental with the NPG Divas singing the title of the song while some horn players got a chance to solo.

That was followed with Madhouse’s “24” briefly before they went into a full version of “Get On The Boat” from 3121.

Then an instrumental started playing with what sounded like sleigh bells making PRINCE ask the crowd if they like Christmas music? Some of the audience yelled “yea” with PRINCE saying he doesn’t like Christmas music as they went into “We’re A Winner” by The Impressions with Shelby J. on lead vocals. Then Liv Warfield took over on “Never Loved A Man” by Aretha Franklin. PRINCE then went into a sensual version of “Satisfied” followed by a funky version of “I Don’t Want Nobody To Give Me Nothing” by James Brown. PRINCE was enjoying himself, dancing and just having a good time with his 22 piece band, and dancing as well with Damaris Lewis who was on stage the entire time.

Then it was time for “Housequake” which wasn’t as long as the one I heard at the second Sayers show in October but was funky nonetheless.

They then went into “The Jam” by Larry Graham, giving the band a chance to solo. Donna and Hannah along with some sax players killed it. That was followed by “The Bird” which went on for a while and then “The Glamorous Life” to close out the show. The last 8 songs some will refer to as “The Vanguard Jam” which he did at the NAACP Awards but it was much longer.  The set list for Saturday night is below which we are told was not circulating completely until now.

People Pleaser
Ain’t Gonna Miss U When U’re Gone
F.U.N.K.
Dark
Something In The Water (Cassie Solo)
Love U 2 Man (crowd interaction)
Courtin’ Time
24
Get On The Boat
Christmas song Parody
We’re A Winner (Shelby J.)
Never loved A Man (Liv Warfield)
Satisfied
I Don’t Want Nobody To Give Me Nothin;
Housequake
The Jam
The Bird
Glamorous Life

PRINCE walked over to the soundboard as the band left the stage. He may have been giving notes on some things he heard during the performance, but appeared to be all smiles after that and before he left with Joshua Welton and a few others.

The band stayed around for a bit talking with people in what I would call the main entry way/lobby leading into the sound stage/club. It was about an hour performance and for $10-$20 bucks and at Paisley Park, could you complain?

There were a couple of kids there and the crowd seemed young. It appears word of mouth hit and for the price, it aroused their interest to come on out and have a good time!

I stayed in the lobby area mostly after the show as people wanted to talk and it was hard to hear on the dance floor. Go figure. It was great hanging with the band and seeing your faces and meeting you all. I’m happy to see you all happy and having a good time.

Now, as for rehearsals and the 2 hour or so conversation with PRINCE and driving around town listening to the new music, I will be sharing those soon. It could be a book so will have to break it up so it will be more enjoyable for everyone.

Elisa, I hope you feel better.

I want to thank PRINCE, The NPG, Julia Ramadan, Katie, Yvonne, Joshua Welton and 3rdEyegirl for the rides and U. This weekend was last minute and unexpected and awesome.-DocFB

Diagnosis: Was an incredible experience to see him perform like that in the Park and in the dark. I’m not sure when there will be parties again at Paisley as they leave for Montreux. I’m sure there will be. As to when…stay tuned.