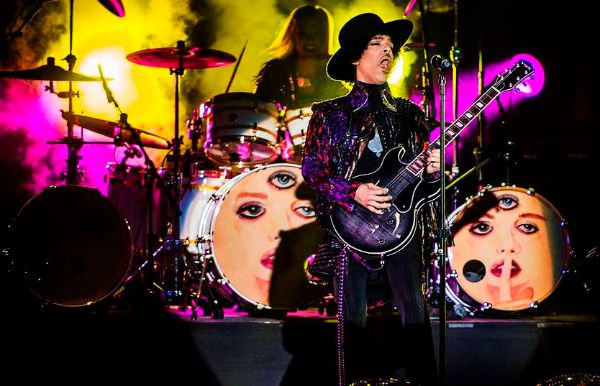 In a great review by Funk*U, They showed why Rolling Stone ranked them so high on their Best Live Acts right now list.

After the show, 3rdEye TV on Livestream returned with footage from the show and more!

3rdEye TV returned with JoshuaWorld playing the keys.  A few minutes later, Prince took over on the keys with his face showing for a quick second.  Then Joshua and Prince were playing simultaneously and then Prince let Joshua back in the mix while he stood by him.  Slowly, he was blocking Joshua and the camera turned left to a laptop that had imaged from the Stockholm show with Joshua continuing to play keys.

We were watching the Livestream on our cellphone and it showed the title to be “Superconductor Reloaded Instrumental” but it seemed some other songs were being played as well.

Prince and 3rdEyeGirl then took the stage and performed “Let’s Go Crazy Reloaded” and the camera appeared to be by the sound board which is why the quality was so good.  The camera was able to zoom in and get some great shots of the performance and still keep the sound.  Good job TG!

After LGC Reloaded was done, the screen went black.  A few minutes later a few minutes of the studio remix of “FIXURLIFEUP” was played while a photo of Hannah Welton’s view of the crowd was shown.

That then ended as well.  A few more minutes went by and we were treated to a great rocking version of “Endorphinemachine” that seemed to have more on the ending than the 3rdEyeGirl shows we saw earlier this year.

“Endorphinemachine” ended and we were treated to Joshua on the piano again with a yellow rose on top of the piano, which I believe was there before as well.  We hear the applause again and the show ended.

We stopped by the Livestream a couple of hours after it ended to see what people thought and they LOVED the live footage from Stockholm and the “FIXURLIFEUP” remixes.

The set list of the Stockholm show is below and provided again by Funk U:

MAKE SURE TO FOLLOW LIVESTREAM SO U DON’T MISS 3rd EYE TV!!!

Up next, “The Beautiful Experience” in Denmark August 7th.  Will a Livestream follow?-DocFB

Diagnosis:  Thoughts of 3rdEyeGirl performing “Glass Cutter” is going through my mind……