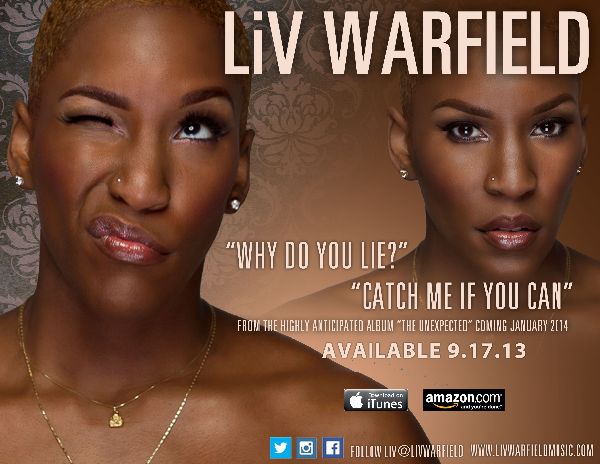 Liv Warfield of the NPG has released 2 new songs “Why Do U Lie?” and “Catch Me If U Can” from her album “The Unexpected” due in January 2014.

The songs are available on iTunes and Amazon.com

We are also honored that Liv will be a guest on the Prince Spreecast to talk about the new songs, her new album and working with Prince and the New Power Generation.

Liv is a member of the New Power Generation, Prince’s band and is honored to have the support of Prince who will be working with Liv to create an album that will be timeless.

Liv describes her musical style as “Alternative R&B Soul with a little bit of rock & roll” and we could not disagree.

Essence.com was the first to debut Liv’s new songs and she had this to say about the songs and the album exclusively to DrFunkenberry.com

“I couldn’t be more excited about Essence.com premiering my two new singles off my upcoming album “The Unexpected”!    I have learned so much as an artist by having the honor of working with an Icon like, Prince.

These records include my band members Ryan Waters, Tyrone Hendrix, Chris Turner, Saeeda Wright, Ashley Seamster and Eric “Pik Funk” Smith.  I was also able to include some of my fellow bandmates from the NPG hornZ section, Roy Agee, Sly Onyageeaka, Keith and Phil Lassiter.   Elisa Fiorillo and Marcus Anderson were very instrumental in the development of “Catch Me If You Can”.

Prince encourages us working together and who wouldn’t want to work with the amazing musicians.  I look forward to making more good music with members of NPG, as well as working with Prince on my album.”

In addition to touring with Prince, she also has been doing her own solo shows backed by the New Power Generation.

The upcoming album will feature hard-hitting vocals like the lead singles but Liv will definitely not disappoint with her powerful ballads.

The album is sure to be “The Unexpected”. Liv Warfield’s hard-hitting vocals and electric performances have been compared to the likes of the iconic Tina Turner.

To purchase “Why Do You Lie?” on iTunes, click HERE.

To purchase “Catch Me If You Can” on iTunes, click HERE,

Again, make sure to join us on the Prince Spreecast as Liv will be our special guest and will be answering your questions.

We cannot stress enough how important it is to support real artists like Liv. Not only is she an amazing singer but also one of the nicest souls you will ever meet.-DocFB

Diagnosis: If you are gonna take $20.00 out of someone’s purse, make sure it is to buy these new songs from Liv!

Catch Me If You Can, Liv Warfield, NPG, Prince, Spreecast, The Unexpected, Why Do You Lie