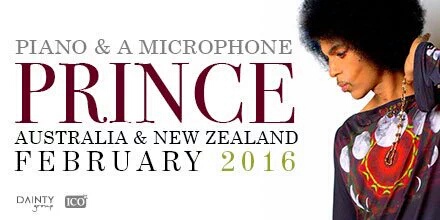 PRINCE is bringing his latest tour, PIANO AND A MICROPHONE to AUSTRALIA & NEW ZEALAND!

The artist who kicked off an amazing preview of the PIANO & A MICROPHONE tour at his Paisley Park studios in Minneapolis last month is bringing the tour to Australia & new Zealand first. This will mark Prince’s first trip back to Australia since his Welcome 2 Australia tour in 2012. As for New Zealand, Prince has NEVER performed there before? Is that right?

Update from the Dainty Group:

For those blessed enough to attend, everything about these exclusive performances has been carefully considered to deliver special once-in-a-lifetime experiences. The repertoire will be culled from Prince’s vast 39-album catalogue and each performance will have a unique set-list that evolves in real time, song-to-song. Fans should expect to witness special interpretations of well-known hits alongside rarely performed B-sides and new, never-before-heard material.

In addition to classic songs from albums including 1999, Purple Rain, and Sign o’ the Times the set-lists have also featured covers by Joni Mitchell, Paul Robeson and Ray Charles; songs Prince has written for other acts including The Time, Sheila E. and Vanity 6; and even a Thelonious Monk-style version of the theme to Batman.

We will keep you updated right here on info!

New Zealand and Australia…..do I even have to ask? ARE U READY????-DocFB

Diagnosis: This tour is a can’t miss. No matter how many times U may have seen him before…U have never seen him like this!!!!!!!