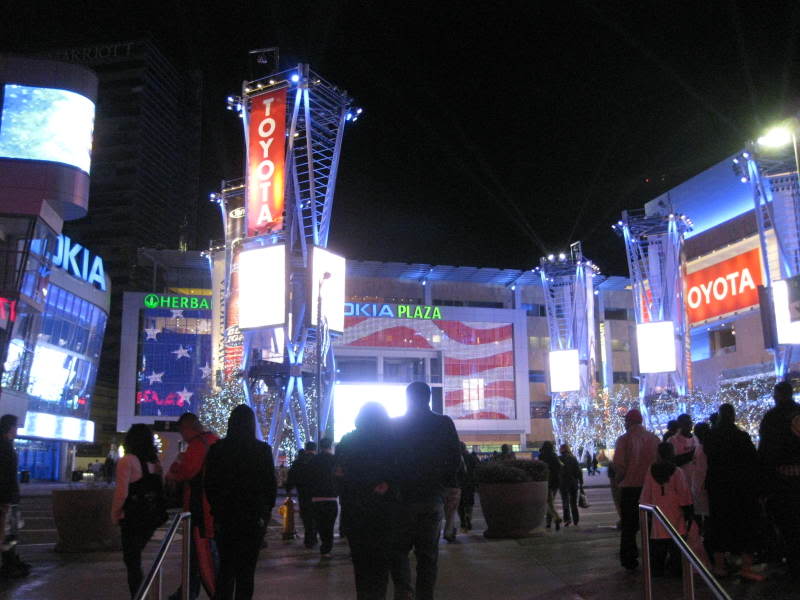 Prince is performing 3 shows March 28th at L.A. Live!  Here is the news you heard first at Dr. Funkenberry.com

Ryan Seacrest made the official announcement this morning on his radio show.  He jumped the news early at 6 A.M and has been giving away tickets to the first show.

Prince will be performing at The Nokia Theatre, The Conga Room, and Club Nokia.

Each show will be a 90 minute set.  Tickets go on sale  Saturday to the General Public thru Ticketmaster.  We hear there will be better seats for the Nokia Theatre show thru his own web site on Tuesday.

When information becomes more clear, we will let you know -Dr.FB

UPDATE: All shows are 77 bux per show and go on sale Sunday. There is a different order of shows then previously reported. The other times listed are when doors open. Should have more info later and will pass it on.-Dr.FB

LOS ANGELES, CA, March 20, 2009 – Six-time Grammy® winner Prince will perform an unprecedented three concerts in three completely separate venues all in one evening within L.A. LIVE, the downtown Los Angeles entertainment and sports district on Saturday, March 28th.  These history making performances are in support of the launch of his new website LotusFlow3r.com on March 24th and the upcoming release of his three new studio albums, available for purchase at exclusive retailer Target and Target.com on March 29th as well as his website.  The three performances will earn Prince the distinction of becoming the first artist to attempt the remarkable record of performing at the Nokia Theatre L.A. LIVE; Conga Room and Club Nokia all in one unbelievable night of great music.

Prince is slated to launch his new interactive member-based website, LotusFlow3r.com on March 24th and has three new studio albums, LOtUSFLOW3r, MPLSoUND and Elixer, a collaboration with his new protégé Bria Valente, which will all be available for digital download on his website at launch time and also bundled together in a three-disc set for only $11.98, available for purchase exclusively at Target and Target.com.  The new website will offer fans exclusive content including access to premium seats for these three shows as well as digital downloads; lyrics that are not available in the album packaging; concert tickets; sneak peeks at upcoming events; live concert footage; exclusive imagery from past albums and other exclusive photos for an annual membership fee of $77.